Founded in 1909 by America’s Socialist Party and launched internationally in 1911 to promote equal rights for women, in particular the vote, International Women’s Day (IWD) gained a new lease of life through the rise of women’s liberation in the early 1970s. But has it now become sanitised, and lost its political edge?

Now in its 101st year this day is more relevant than ever, with women experiencing the worst attacks on their living standards for decades. Official UK employment figures reveal that it is women, often in the public sector, who are losing their jobs at a faster rate than men and now make up 1.12 million of the 2.67 million unemployed. Not only that, but women are also dealing with static or falling wages, reduced state support for childcare, closure of libraries and community centres and benefits cuts.

But the political content of IWD has become diluted over the years, to such an extent that few of the 232 events highlighted on the day’s official website address unemployment, benefit cuts and the closure of public services which directly affect millions of women. From the 1980s an increasing focus on lifestyle came to the fore,  and today organisers offer tips on self employment or health, arts and the middle class professions. Indeed, in 2012 they say “we like to celebrate International Women’s Day, but we also want to celebrate our Supporting Partners.” As an indication of the commercialisation of the event, these partners are large corporations such as Insurance company Allianz, Scotiabank and African Development Bank.

Local events seem little better. Stockport Council’s IWD event is a partnership event with the Women’s Organisation, an economic development agency. The publicity proclaims: “This is a FREE event sponsored by Stockport Council for women running their own business in Stockport”. In Manchester, the council organised a day of “Inspiring Futures” with the emphasis on gaining skills and applying for education or jobs. Although a worthy initiative, the role models offered include a barrister and the chief executive of Nuclear Enterprise. Unfortunately, these are unrealistic options for most young women in Manchester, especially at a time of rising university costs.

In Salford the IWD event is in a local youth centre. And while the event is billed as “a day of celebration organised by young women for women of all ages”, it should perhaps be noted that this comes at a time when Salford Council is proposing cuts to the youth services of £1 million. In Trafford, the Conservative Council, which has voted through £16m of cuts affecting libraries, social care, parks and 100 jobs, has linked up IWD with the 2012 Olympics and is offering free tasters in sport, with health and fitness advice also available. There is little recognition in any of these events of the worsening of women’s lives and uncertain prospects for the future. 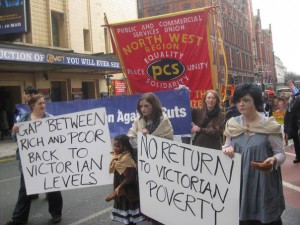 Looking back at the origins of IWD it would seem the shopworkers union Usdaw has better understood the spirit of 1911. Since 1970 Usdaw has had a majority of women members and it now has record numbers of women activists, with more than half their shop stewards women and with thousands of others playing a role in unionlearn, the unions’ training centre, and as health and safety representatives.

For Sharon, a production worker in a biscuit factory, being in a union meant she has kept her job. “I have a serious back problem and sometimes cannot get out of bed. I had a lot of time off work and my union, Usdaw, stepped in. They got my medical condition recognised under the DDA and negotiated with my employer for me to keep my job. They made me determined not to give up my job and keep fighting.”

Ruth Cross, an Usdaw Equalities Officer, explained how “most of our women members are juggling work with caring for their families and we understand the pressures they are sometimes under. We have helped thousands of women to get the support they need at work – whether it’s [working hours] that fit round their families, time off when their children are ill or extra breaks during pregnancy.”

For a day which offers more than lifestyle and fitness sessions the way in which Usdaw’s members are advancing their interests may stand as an example. As another event which brought back some of the day’s original spirit, last Sunday saw anti-cuts campaigners march through Manchester to hold a final rally in Catherdral Gardens close to Chethams Library where Marx and Engels studied in 1845. They would recognise straightaway a ruling class on the rampage and a working class fighting back.

The Working Class Movement library is holding an event on Saturday 10 March at 2pm, with a talk by Nicola Wilson about the working class Lancashire writer, Ethel Carnie Holdsworth.