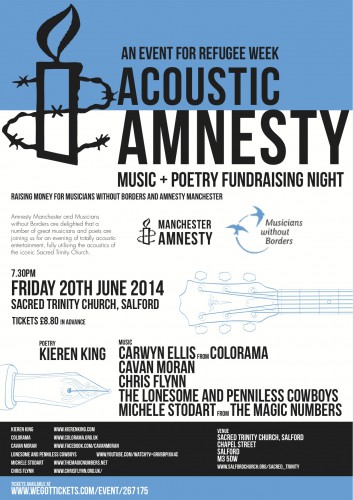 International successes include a Rock School in Kosovo bringing Serbians and Albanians together and a Samba project for refugees in Palestine.

While there’s a strong international focus, the organisation also works with around 300 refugees, torture and war survivors in the North West each year, building confidence and working through traumatic experiences in music therapy sessions.

For the last three years, the Stone Flowers project in Salford  has helped group members express their thoughts and start to deal with the trauma they’ve experienced by writing and performing their own music. It is run in partnership with Freedom From Torture, a charity offering free counselling to torture survivors.

Group member Lito says the experience has changed him: ‘Performing with the group reminds me of who I am and what I live for.’

The participant-led project is a work in progress and several survivors now see it as crucial for raising awareness for their situations and what they and others have gone through. They aim to promote awareness of human rights abuse and challenge negative preconceptions of refugees and asylum seekers.

The Stone Flowers project members have just been in the studio recording six songs, and plan to launch a crowdfunding campaign to raise funds to record and finish the album.

Nick Jones, Development and Finance Manager of Musicians Without Borders, says: ‘The testimonies and feedback from the participants themselves and the psychotherapists they work with show a reduction in the effects of trauma and isolation, and improved confidence and self-esteem.’