The Library Theatre Company and The Lowry have again teamed up to reproduce some of the finest independently crafted local theatre of last year. 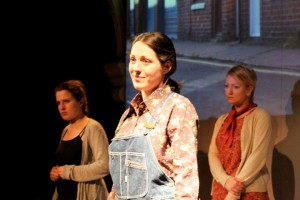 Can’t Stand Up For Falling Down at Kings Arms last year.

This month’s Re:Play festival is designed to provide the next step for young or inexperienced actors, directors, writers and producers, most of whom worked for little or nothing in order to stage original theatre or adaptations for small stages last year. The productions are predominantly self-funded and created with a DIY ethos, and with the festival’s support they have each restarted rehearsals for another run.

Independent production companies will benefit from the guidance and experience of local theatre professionals at Manchester’s Library Theatre Company, which is currently nomadic while awaiting the completion of its new premises on First Street, named Home. For audiences, it represents another opportunity to see any productions missed and in the larger setting of The Lowry’s Studio theatre.

Among those billed for the 2013 festival is My Arms by James Leach, which debuted at last year’s 24:7 Theatre Festival and which Manchester Confidential believes “fully deserves to be seen by a wider audience”. It is a story told in reverse order that slowly uncovers the reason behind a strained marital relationship.

Another option is the Yorkshire based exploration of women’s liberties written by Richard Cameron, Can’t Stand Up For Falling Down, which will appropriately be re-run to coincide with the centenary anniversary of the suffragette suicide of Emily Wilding. It was originally staged at Kings Arms, Salford, by the House of Orphans and Unholy Mess production groups and will be translated onto the Lowry stage for dramatisations from 21-23 January.

Elsewhere, there are opportunities for budding writers to pitch their work to an audience at the Pitch Party, while an open discussion and a scriptwriting event challenging four writers to produce a play based on a current news story within the first week of the festival are also scheduled.