Re:play festival review: Can’t Stand Up For Falling Down

Ruby, Lynette and Jodie are three women from a South Yorkshire village. None of them know each other, but they are all connected by one man: Royce Boland. Through a series of cleverly-constructed, non-linear monologues, we are taken on a journey spanning eight years, from innocence lost to a final act of retribution. 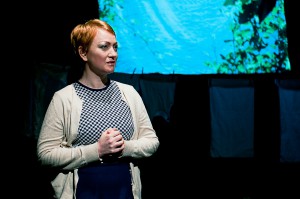 Richard Cameron’s Can’t Stand Up For Falling Down has been reset in the sixties (the play as written is set in the eighties), specifically around the time of the Women’s Lib movement. The simple stage design consisted of two washing lines – one central and very high, from which hung a few shirts and a large bed sheet, all off-white, and one further downstage at a normal height. The three characters begin by hanging out washing and singing a three-part harmonised a cappella number that introduced the themes of religion, hope and glory, and prefigured the eventual coming together of the three characters from their seemingly disparate starting points.

Edwina Lee had great energy as Jodie, the youngest of the three women, managing to maintain a childlike idealism and enthusiasm for life after the trauma of witnessing Al Janney’s death eight years earlier. Esther Dix portrayed well the 22-year-old Lynette, God-fearing and trapped in a marriage with an increasingly abusive man. And Lucia Cox seemed to really relish telling her story as single mother Ruby, who, after eight years of trying to find happiness in complicated relationships, resolves to focus on spending quality time with her son – just as his father comes back on the scene. Every syllable was heard, she engaged well with the audience, and had a wonderfully light delivery. 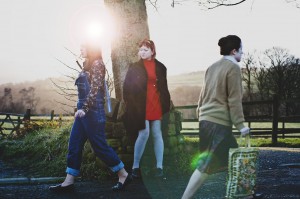 Under the direction of Lucy Allan, the piece was pitched just right. The downstage washing line meant that the depth of the playing space was drastically reduced, but this created an intimate space where each character could engage with the audience in a more immediate way. It also made the superbly choreographed scenes of domestic violence later on in the play all the more uncomfortable to sit through.

A co-production between House of Orphans and Unholy Mess, Can’t Stand Up For Falling Down was selected for the re:play festival after its brief run at Studio Salfod last May. The team have adapted to the larger space at The Lowry Studio well, and special praise must go to each of the three cast members for battling admirably against the constant noise of the air conditioning. A strong piece with some bold choices and a committed cast, CSUFFD had a well-deserved place in this year’s event.