The existential crises created by 21st Century living – worries about sex, jobs and the meaning of it all – build up pressure in each of the six characters in this play from Black Toffee, with entertaining outcomes. 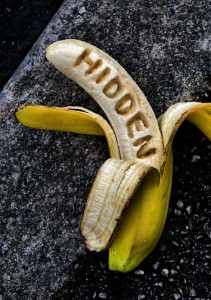 Hidden deals with a very modern problem: what happens when the secret voices in our heads overwhelm us?

Writers Peter Carruthers and Laura Lindsey, who also played all of the parts, certainly have a flair for the humorous, particularly when dealing with the mundane. Their characters are comic exaggerations, but they contain just enough truth that we are willing to believe that we ourselves, or people very much like us, might act the same in similar circumstances. Who hasn’t bashed out an abuse-laden email to a co-worker, only to delete it at the last moment? Who hasn’t written a romantic novel in their own head, projecting sexuality onto people we have never even spoken to? Perhaps we have not all taken a pregnancy test and anxiously awaited the result – but we probably know someone who has.

The key to this play, as the name suggests, is that you get to hear the hidden thoughts of the characters. They make you squirm, laugh and feel embarrassed, but above all they draw you to their humanity. The monologue-driven approach allows Lindsey and Carruthers to deal with intensely personal situations, like the strains put on a young woman by an unwanted pregnancy, or the longing for companionship and love felt by a trapped office worker.

Perhaps less believable, and therefore less effective, were the scenes dealing with more off-the-wall characters; for example, one of the early acts involved a man who appeared to be an English Josef Fritzl. This flight from normality was much less real than, for example, a supermarket checkout assistant preoccupied with sex, and so seemed out of place.

The staging itself was plain, necessarily so in a play that moved so quickly between quite different settings and moods. Director Martin Jameson had a difficult job in how to approach a work that contains so much in such a short time, and by keeping things simple he prevented it from becoming confusing and difficult on the eye. The music and sounds were understated too, with a recurring melody signalling the changes of scene, a useful marker when there is no obvious demarcation between one character and another.

It is a relief and a pleasure to find out that so many worries are universal, and that many of the things that trouble us most have a funny side to them. While Hidden might run slightly long it also provides a lot of laughs and does it indeed reveal much that is normally hidden. I suggest that you keep an eye out for any future performances of this very funny play, and for any new work produced by Black Toffee.

Re:play festival continues until Saturday 26 January with all productions taking place at the Studio theatre at The Lowry. The festival showcases its picks of Manchester’s independently produced fringe theatre from the past year. Visit their website for more information.