Review: Chavs – The Demonization of the Working Class by Owen Jones

The backbone of Owen Jones’s debut book is a well-researched, assertive advocacy of a return to a class-based politics that values working-class culture and calls for a future of a progressive labour movement. In it, he goes further than the current fad of analysing the present crisis as the result of unprincipled bankers, tracing the decline of organised labour in the battles of the 1970s and 80s and the subsequent breaking apart of British industry, which in turn gave rise to a culture of widespread vilification of the working class. 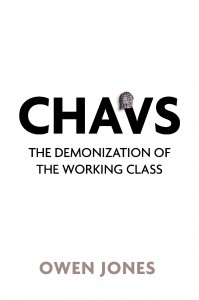 The “chavs” of the piece are the stereotypes, mostly created in the minds of various right-wing hacks and politicians, of a working class that has adjusted to de-industrialisation by moving into low-paid work in the service economy or, depressingly often, structural unemployment. The bile and, often, complete lies spread by comment writers and Tory politicians across the last decade are mobilised by Jones and, when stood together, reveal a consistent and appalling dehumanisation of millions of members of society. The “chav” model is merely a figleaf for some of the most disturbing thoughts of some of the most disturbing people who consider themselves to have won the class war of the last three decades. Jones’s indignance is well-paced and well-argued and it is hard not to feel convinced after the first few chapters of a systematic and long-term assault on the working class.

From this, he establishes how more or less every practice of that class is treated like some sort of pathology by successive governments and their allies in the media. It is assumed that they cannot bring up their children properly, that they are criminals, are stupid, and even that unemployment is their fault. A recurring theme is how we have returned to a Victorian ideology of unemployment being a moral failing, rather than being due to the restructuring of the economy or the impossibility of getting jobs in places where there aren’t any. With quotes from journalists, politicians and commentators openly proposing what amounts to eugenics directed at workers, we can see what he means when he calls it the last acceptable prejudice.

The central thesis is engaging and informative enough that the book’s problems don’t prevent it from being a stimulating and engaging read. Nevertheless, they are still problems. One issue, ironically enough, is Jones’s engagement with the working class itself. Peppered throughout are quotes from interviews with members of the communities he uses as case studies, and each are coherent, insightful, and not only sum up local and national problems but also prove his point that workers and the unemployed aren’t idiots. But unfortunately such quotes are not deployed enough, and what could have become an expansive account of the working class in their own voice becomes instead an account of what the academics, Guardian journalists and Johann Haris of the world think.

Similarly, the working class is not given any agency in its own demonization. Quotes from comments on websites such as the Daily Mail‘s are littered throughout, particularly the first chapters, but it is assumed that the posters are middle class. When David Cameron was quoted making a comment about his daughter coming home from a party looking like she’d “fallen out of a council house”, it is taken as an observation on the sort of attitude Tories have to the poor. In my childhood household, headed by a part-time worker in a nursing home and an electrician, any swearing or shouting would receive the admonishment that it made us “sound like a council house”. This split between the skilled and unskilled working class, familiar to anyone who lived in such mixed communities, is indirectly acknowledged in the passage on the split in the left vote during the 1983 election, but it is largely dismissed as the result of a typical Tory trick dating back to the 1860s. Far from it: the Labour Party was founded on the image of the respectable working class, hard-working and rather pious. It is because of this that Ed Miliband was able to launch his extraordinary attack on the unemployed and benefit recipients last week and present it as authentically Labour.

Interviews with several New Labour figures are dotted throughout. The Tories are presented as pantomime villains, which is unlikely Jones’s fault since this is how they come across in any medium. Blairites, on the other hand, are given a better light, always “admitting” and “conceding” mistakes, and pleading the best of intentions. Salford’s own Hazel Blears is allowed to regret that Labour didn’t do more on housing, blaming it on them not having a “big housing character” in cabinet. In fact, they did, in Blears herself. Look at the wholesale redevelopment of Salford, involving gentrification and the moving of whole streets away from their homes and wealth, both public and private, into the hands of private companies. Blears pushed this instead of social housing, and for her to regret having “16,000 on the waiting list” is rank hypocrisy. Jones lets this slide, skimming over such remarks, which is curious considering that he clearly does not like New Labour, repeatedly stating that he considers them a continuation of Thatcherism. To underline this, however, he really needed to pen a chapter out and out attacking them, rather than stating his distaste in asides.

The relationship of the book to Labour’s regeneration is therefore an issue: is Jones positioning himself as a Party thinker? Labour has staunchly been anti-working class for so long that a book advocating that class and admonishing its attackers would surely not be well-received. However, he is careful to advocate community organising as a way of rebuilding the left, and refers at several points to the “rootedness” of the old working class communities. When he writes, during a discussion of the BNP, of Labour’s traditional role being the “shielding of working-class communities from the worst excesses of market forces”, he sounds eerily similar to the blurbs surrounding Blue Labour, the ideology emerging around Ed Miliband.

Blue Labour is, simply, creepy, and concedes huge amounts of grounds to the far-right. Rather than idolising the old communities that have long disappeared, we need to accept that we live in a very different world. Hairdressers are emblematic of the new-look working class, but they do not live side-by-side in terraces as miners once did. Similarly, university graduates are finding that they are ending up in routine, uncreative, low-paid jobs such as call-centre work. Jones convincingly argues that we need to refer to such workers as workers, while simultaneously regretting the passing of cultures and forms of organising from decades ago. The best remark on this matter was from a union leader quoted in the conclusion who acknowledged that a new generation needed to take the reins of the labour movement, and inject it with the ideas and initiatives that the current generation can’t grasp. This also seems true of Jones, stuck between an admiration for labour of the past and their Labour Party, and an awareness that both labour and Labour have fundamentally changed.

Nevertheless, Chavs is worth a read. It is accessible, enjoyable and informative, convincingly arguing not only that a class war has been waged for the last three decades, but that the first stage of a fightback is through reintegrating class into our politics. Jones takes it easy on Labour, and his ideal working-class is one with good jobs and high self-esteem, rather than the abolisher of all classes. Nevertheless, neither his attack on the chav stereotype nor his advocacy of a class politics would have been possible a couple of years ago, and the gems of information, statistics and quotes will be useful for anyone trying to get to grips with class, and class war, in the first decade of the 21st century.