Review: Free for Arts Festival in Salford and Manchester

The quiet room of the Sacred Trinity church was anything but still during the Free For Arts Festival. Distorted sounds corrupted the space, vivid jungle-greens disorientated, whilst the potent aroma of lavender strangely soothed amidst the turbulence.

The multisensory installation at Sacred Trinity Church confounded the visitors’ expectations of the church as a quiet and sombre place.

Four graduates from the Visual Arts programme at The University of Salford organised the annual Free For Arts Festival, which took place from 3rd to 8th October. Benjamin McChrystal Plimmer, Rafael Perez, Natalie Jervis and Frida Cooper began planning the festival in February and secured funding from Forever Manchester, a charitable organisation that funds and supports community projects across Greater Manchester.

Free For Arts Festival, described as a non-profit celebration of art and performance, aims to engage local artists and art enthusiasts with a diverse ensemble of visual arts practice, but most importantly, facilitates the showing of artwork at no cost to the artist, as all venues are negotiated to be used free of charge.

Now in its fifth year, the contemporary art festival included work from over 100 artists, spanning 19 venues across Salford and Manchester. Arguably the most unique venue used was Sacred Trinity Church, the oldest church in Salford with a longstanding history of supporting the creative community.

Kate Freeborough, one of a trio of artists who presented the exhibition Collections at Trinity Church, used the church pulpit for her performance-based work, which involved sitting for long periods whilst writing gesturally and continuously onto an enormous scroll of paper which overspilled the pulpit. ‘It’s a versatile space both for my live work and the installed sound and collage work of the exhibition’, said Kate of the church.

Festival Director Benjamin  McChrystal Plimmer explained what was most important to him when organising this year’s festival: ‘I wanted to establish new relations and connections between artists and venues and to give anyone the opportunity to show.’

For Cheshire-based artist Lizzie Fisher the festival was an exciting opportunity to network and exhibit with Manchester-based artists. ‘The experience has been great’, she said: ‘It’s harder for me to interact and network because I don’t live in Manchester- through the festival I’ve met a lot of people that I wouldn’t normally have encountered.’ 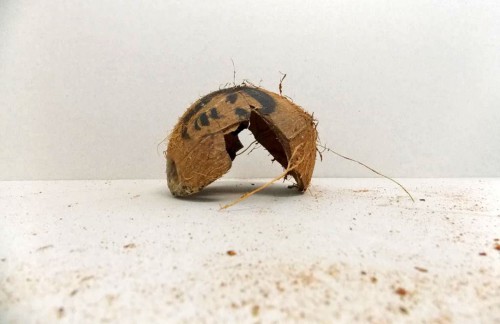 In her artwork Coalition Coconuts, artists Meg Woods invited visitors to fire balls at coconuts spray-painted with pictures of politicians.

Fisher printed artwork on T-shirts and encouraged visitors to wear them as they navigated the exhibition space- an idea intended to lead to greater interaction between audience, artwork, and artist. The strategy seemed to work, visitors were seen exchanging smiles and chats as they wore the T-shirts, it served as something of an ice-breaker as they entered the large space of the 4th floor at Federation House.

Brendan Fletcher, programme leader of the Visual Arts course at the University of Salford, praised the ambition and professionalism of his former students: ‘We’re immensely proud that our graduates have played such an important part in organising, curating and exhibiting work for Free For Arts Festival.’ He added: ‘It’s testimony to their commitment to giving something back to the community from which they emerged’.

Overall, the festival delivered an experimental yet challenging set of exhibitions this year and the eclectic mix of work on show demonstrated a level of risk-taking that is vital to ensure a continued engagement with emerging artists. While some of the painting in the Free For All show was too commercial for my taste, it dominated the central exhibition space with an unexpected elegance due to clever suspension methods.

Impressive was the quantity and quality of performance art included, which – let’s face it – often gets a bad press. On the contrary, Coalition Coconuts by Meg Woods, which incorporated spray-painted images of politicians upon real coconuts, highlighted sensitive political issues, but with a generous measure of cheeky Mancunian wit. It made the serious underlying message of the work accessible through the fun of play by inviting visitors to lob balls at the political coconut-heads, wondering if you would hit or miss. This year’s Free for Arts Festival hit the bull’s-eye in terms of satisfying the appetite of the Mancunian culture vulture and successfully showcasing some of the best of Manchester’s emerging creative talent. There’s only one thing left to ponder: can it better itself next year?