Review: Perverted Moves in the Dark at the Afflecks and Northern Quarter Music and Poetry Fest

The biggest star of Perverted Moves in the Dark is Felicity. She is adaptable, watchable and extremely funny. Felicity’s show-stealing ability is all the more remarkable considering that she is a prop. A rubbery, life-size fake vagina, actually. 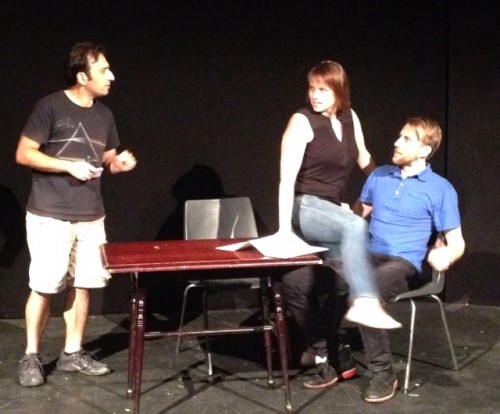 A scene from Perverted Moves in the Dark at the Three Minute Theatre at Affleck’s Palace in the Northern Quarter.

How exactly did the writers come up with such ‘perverted’ subject matter? ‘It made it easier to have a theme’, says Rahimzadeh, ‘and the first sketch that came to mind was Felicity.’ The sketch she stars in involves an awkward sex shop customer (played by Matthew Melbourne) and is split into three parts.

Heywood explains that this format is a result of  ‘writing pieces that were far too long but finding they work quite well when they are split into segments.’ The recurring sketches are certainly audience pleasers because they make the show feel cohesive and when the lights go up on a familiar scene, people are more inclined to laugh. Melbourne is particularly hilarious as he is by turns embarrassed, irritated and downright crude.

Unfortunately on the night the intimate Three Minute Theatre at Affleck’s Palace was sparsely attended, making it difficult for the performers to elicit the laughs necessary to buoy up the atmosphere of a comedy night. There were also awkward moments where the timing wasn’t properly judged. In particular the call centre sketch and the Irish funeral incest scene involving a ridiculously inappropriate tribute to a dead brother read by a nun fell flat at the end despite having a strong premise. That being said, the moments of perfectly pitched comedy were golden. Emma Laidlaw’s monologues as one half of a horny couple in a restaurant particularly stood out for me. Her ability to hold the audience’s attention while reeling off seemingly endless food-based euphemisms is a testament to her great comic talent.

Sketch comedy is the perfect example of a genre that takes time to develop and needs the space in which to accomplish that. Rahimzadeh makes it clear that there is a link between how easy it is to be a performer in Manchester and which venues are available: ‘Once venues get a bit of a name, like the 24/7 festival, it gets difficult to find a place.’ But it’s about creating something for yourself, he adds, ‘you have to make it happen.’

Having previously performed their show at The King’s Arms in Salford, the writing duo managed to secure a last minute spot at the Affleck’s and Northern Quarter Music and Poetry Festival. Sitting outside the tiny theatre both Rahimzadeh and Heywood agree with a smile: ‘We’re a good community here.’ One thing is clear: to have more experimental comedy like their show,  Manchester needs more venues like the Three Minute Theatre, and audiences willing to support them.