An old script dramatising George Best’s life has been reworked for the stage and is attracting sell out audiences to Lass O’ Gowrie for Manchester Irish Festival. MULE was there on the opening night. 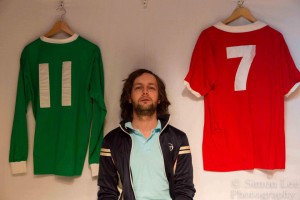 George Best was one of the most brilliant sportsmen of his era, a man possessed of natural talents coupled to good looks and charm. He was the first celebrity athlete, in the sense that his fame eventually had nothing to do with the game that he played, and everything to do with his personality and lifestyle. He was a storybook hero, a boy from the streets of Belfast made good, beating the rest of the world and getting the girl(s). But, like so many heroes, he had an Achilles heel. Best’s was drink.

‘The Best’ is a lost script by writer Jack Rosenthal that was recently discovered in the archives, and has now been adapted for the stage by Ian Winterton. The play follows George Best through the twilight years of his career, once the glory was over and he was merely a journeyman footballer. It deals with many complicated issues, but all of them have a common source: self destruction through drinking. The question that the play grapples with is why; why would a man who has it all need to drink?

The subject is tackled through group interrogation while Best is trying to dry out in an American clinic. His fellow patients shout, swear and berate him, always asking him why: why would you hurt your wife? Why are you throwing your talents away? Why can’t you be happy? Of course, there are no simple answers, and if there is one thing I took away from ‘The Best’ it is that addiction has many parents. No one thing causes someone to drink, and no one thing can cure them. 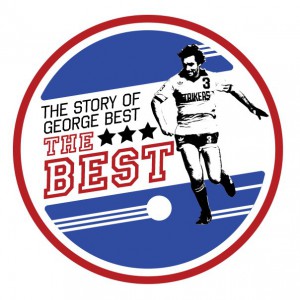 Benjamin Patterson as George Best was presented with a difficult task; to be charming, troubled and somewhat of a bastard all in just over an hour. He succeeded admirably, managing to portray red-eyed bleariness, raging self hatred and impish charm. Charlotte Dalton, as the long-suffering Mrs Best, was certainly believable, if not quite as engaging as Patterson. The cast as a whole was strong, with a notable comic performance coming from Sinead Parker as Best’s mother. Even the difficult issue of the cast performing much of the play in American accents did not prove a problem; never jarring, if not quite hitting every note.

The set was simple, with white walls invoking a changing room and a clinic. You could almost smell the disinfectant, mixed with the sweat of a used football shirt. The compact nature of the Lass O’ Gowrie was perfect for representing the claustrophobia of a rehab clinic, the pressure of being hunted by the paparazzi and the shuttered world of an addict. The direction never got in the way of the story, allowing the dialogue – and there is a lot of dialogue in ‘The Best’ – to be heard. A few flourishes, such as repeated crowd chanting of “Georgie”, by the entire cast, strobe-lighting that imitated flash-bulbs and a projection of the real George Best scoring a goal, added to the immersive quality of the play.

For a script written almost thirty years ago, the issues dealt with in ‘The Best’ are surprisingly modern. Sportspeople, particularly footballers, are now personalities first and athletes second, and George Best was the first of their breed. Private lives have become public, with dozens of magazines and TV channels devoted to tracking the every move of ‘celebs’. ‘The Best’ asks the question: why did George Best drink?, but it ends up revealing something more disturbing. With that much adulation, that much pressure and that much temptation, drinking yourself to death suddenly seems like a reasonable response. Don’t be surprised to see ‘The Best’ touring soon as it is very strong play, well performed, with effective staging and direction.

The Best continues at Lass O’ Gowrie until Monday 18 March. An edit of this review first appeared on the Now Then Manchester blog.