Tubers Music, a monthly night of experimental music held at St. Margaret’s Church, Whalley Range promotes experimental and improvisational music by local and national artists/musicians who make music, sound and noise that falls outside of the mainstream. 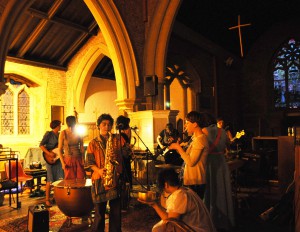 Berlin based composer Richard Scott Lightning Ensemble delivered this month’s implosion of sounds along with inventive improvisers Human Combustion Engine and Womb, an all female collective fiercely dedicated to the act of expression. First up on the night was Womb with a 30 minute improvised set of chanting, marching and war painted faces bringing on the doom. Womb is a Manchester based collective initiated by artist and musician Louise Woodcock as a supportive platform for female artists and musicians to make experimental music in a male dominated scene. Womb’s first gig was at Islington Mill for the Manchester Artists’ Bonfire in January 2011 which paved the way for a plethora of diverse gigs such as supporting Damo Suzuki and Electrelane. They started off the evening with a toy zooped up violin with bells and chains accompanying. Then came a call to arms of sounds, drums, guitars, trumpet and bass with saxophone leading the pack of howling banshees. The set developed into something dark and satanic with timpani drum playing filling the church paired with droning undertones of organ sounds reminiscent of 70s horror films. About 15 minutes into the set a glimpse of a reprise with a breaking thump and cowbells creating almost a stand off with womb and the devil, with sporadic yet repetitive chants. Rising up the sound became a ride on a trance state until repetition slowed into a throb and ended with a mixture of distortion and applause. 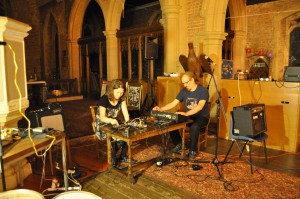 After a small break and friendly conversations in the grounds of the church we were presented with the second group of the evening, Human Combustion Engine, an improvisational duo from Leeds – Melanie Crowley and Phil Todd. Human Combustion Engine are a synth project offshoot of Ashtray Navigations who have led the way for upwards of 15 years in the field of psychedelic noise freakout rock and drone music. At the start we were told that the duo were not much to look at so “if you want to walk around the room and listen to the sounds, to see if the sounds are different in different parts of the church, you can”. The battle of synthetic other worldly noises had the audience captured and the lack of visual stimulus was irrelevant. The noises that resulted from their knob twizzling made me visualise alien birds landing around the room perching on the window sills calling out to each other before taking off flying around our heads. A dying spaceship needing air and saying goodbye before the set faded to space.

Another break gave some the opportunity to dress up from a children’s dressing up box in the church and others the opportunity to discuss the diverse range of sounds heard so far. And then came Richard Scott Lightning Ensemble. Richard Scott is a Berlin/Manchester based composer and improviser, on this occasion supported by his lighting ensemble made up of Manchester based musicians Adam Linson, Phil Marks and David Birchall. Richard Scott was closely associated with London Musician’s Collective in the early eighties before moving to Manchester in 1991.  A strange moment fell over us as the band started, when it appeared the sounds and the visual actions of the players didn’t match up: A conductor creating sounds out of thin air, conducting a Looney tunes band. Richard Scott waved Buchla lightning/WiGi infra red controllers instinctively yet spontaneously to create a wondrous electronic landscape. As an audience member it felt like fast forwarding a tape trying to find the part you thought you wanted to listen to but never getting there.

The beat was brought to us by a kiddy’s kit played by a giant not able to hold the stick properly and then using his palms. A guitarist picking and prodding the guitar, using a comb and at times an acorn to create a primal set of plucking sounds. A double bassist using the wrong side of his bow with no sound coming out completed the brilliantly broken picture. The use of the walls and table tapping with moments of complete noise falling into jagged quiet sound and whistles disappearing into silence, brought the inspiring set to end. This was a venture into true experimentation, you had to let yourself be carried away and get absorbed.

Such an interesting and inspiring night was helped along by the beautiful surroundings and acoustics of St Margaret’s church and also the passionate and friendly promoters who thought to put these two aspects together for what was a very successful event.

Tubers’ next event is September 24 with a rare performance from Drapeau Noir a collaboration made up of three excellent UK underground groups, Part Wild Horses Mane On Both Sides, The Hunter Gracchus and Chora. St Margaret’s Church 8- 11pm, tickets on the door £5 waged £4 unwaged.