A group of squatters have occupied a flat above the Royal Bank of Scotland branch on Palatine Road in Didsbury. This weekend the group unfurled banners denouncing the huge bonuses the bank continues to pay out at a time of massive cuts and despite incurring a loss of £1.13bn. Banners emblazoned with slogans including ‘The Squatters Are Revolting’ and ‘We bailed out RBS & still £1.2bn bonuses!’ were hung from the apartment. 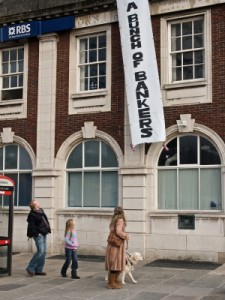 One of the squatters spoke to MULE: “We did it to highlight how we have bailed out the banks yet they don’t care about people who have to struggle for everyday existence.

“The banks are one of the main culprits for current problems in society – whether it be cuts to welfare services or unemployment among 18-25s or huge cuts and low incomes and we see RBS as one of the worst.”

RBS received a total of £45.5bn in two rounds of bailout payments from the government after the implosion of the banking crisis in 2008. This pushed public borrowing it to an all-time record high in 2009, however the previous government refused to fully nationalise the bank. RBS, which is now 83 per cent owned by the public, recently announced losses of £1.13bn for last year but nevertheless paid out £950m in bonuses to its investment bankers. Chief Executive Stephen Hester, who received £2m, claimed that reduction of bonuses could prevent the bank returning to profit.

This has provoked furious reactions at a time when the government is implementing massive cuts to services in order to shore up the public deficit. The spokesperson for the squatters described how members of the public have taken positively to their protest: “We have good support from the workers in the bank and people in the community have been round to offer support. There has been a really good reaction.”

The police also visited on Saturday: “The police were around about five minutes after we dropped the banners. They suggested that we use blue tack or sellotape instead of rope to hang the banners. Basically they were alright. 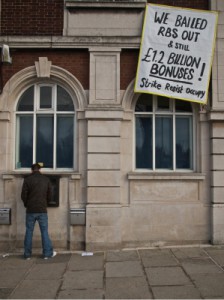 They said they tended to agree with us.”

The group are now facing eviction but as they have no lawyers are representing themselves. “We had court today and got it adjourned. We are still fighting in to keep the property which we have made our home because they have no plans for the building at all and it has been empty for 4 years.”

He added that with the action they intend to highlight a predicament facing thousands of people across the country at a time of redundancies and cuts to welfare: “The eviction scenario is being replicated around the country and we want to raise awareness – especially when there are 18,000 empty houses in Manchester”.

The action brings into focus the housing crisis on a local level. In February 2010 Manchester’s social rehousing waiting list topped 16,500 households and the Council expect this to increase with changes to housing benefit. The pressure on those in precarious housing situations is also likely to be aggravated after the Council introduced a new policy that gives priority to employed people on the list. This means that those out of work and in greater need of housing are effectively pushed to the bottom of the list. However on its website the Council, which announced 2,000 redundancies in January, says “[t]he rules help people who need housing most, and recognise those who make a positive contribution to the community.”