Street artists strike against advertising in run up to Olympics

Artworks protesting against the advertising industry have been pasted over eight billboards across Manchester as part of a subvertising campaign taking place throughout the UK. 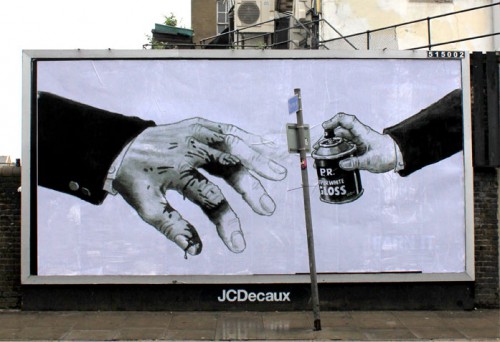 A subvertised billboard in London. Art by Manchester artist Polyp

Street artists from a range of countries including Ron English, Broken Fingaz, Know Hope, Banksy collaborator Paul Insect and Manchester’s Polyp contributed artworks for the “brandalist” action which saw 35 takeovers of billboards in Manchester, Leeds, London, Birmingham and Bristol in the weeks before the Olympics.

Activists say they were provoked into the project by Olympic Games organisers’ strict enforcement of corporate brands, and their desire to reclaim public spaces from what they say are the destructive impact of the advertising industry on issues including debt, the environment, self-image and consumerism.

Protesters also said they were acting in response to official findings by the government’s Riots, Communities and Victims Panel, which raised concerns over “the aggressive marketing by brands to young people, who cannot afford their products”.

The panel recommended that parents and schools be provided with better information “about marketing techniques and the way they seek to influence behaviour”.

One subvertiser, Robert Grayson, claimed the public were treated as “lab rats” by marketing executives who “exploit our fears and insecurities through consumerism”. Explaining the action, he said “we’ve taken over these billboards because the advertising industry takes no responsibility for the messages they force-feed us every day.

“They claim to give us choice but we have no choice to ‘opt out’ from these intrusions into our public and personal spaces.”