“Supersize” Titan prisons are back on the agenda despite being scrapped four years ago due to widespread opposition. 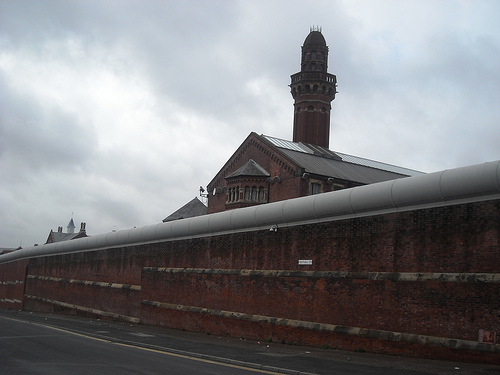 Will overcrowding at prisons like Strangeways be used to justify building supersize prisons? Photograph: Gene Hunt

In April 2009 the then-Justice Secretary Jack Straw abolished controversial plans to build three 2,500 place ‘Titan prisons’, at an estimated cost of 1.2 billion. But now in the face of condemnation from the Prison Governors’ Association and the Chief Inspector of Prisons, the plans for supersize prisons are to be revitalised.

The proposal for Titan prisons emerged in 2007 with Lord Carter’s Review of Prisons, in which he was asked to recommend a solution to the problem of massive overcrowding that the British prison service faces. He recommended the construction of three ‘Titan’ prisons that each house 2,500 prisoners; double the size of our current largest prison.

These prisons were also expected to be privately financed, designed and run, according to the Prison Reform Trust. After reworking the plans after widespread concern, however, Justice Secretary Jack Straw pledged to build five smaller, 1,500 place prisons instead.

Current Justice Secretary Chris Grayling has announced the closure of six prisons to make way for a new institution that holds more than 2,000 prisons, despite denying in parliamentary questions recently that that they were resurrecting the Titan prison idea. He also pointed to privately run prisons as a model to aspire to for the building of these Titan prisons.

Mr Grayling used the G4S run Oakwood prison in Staffordshire as an example to aspire to, stating that the average cost at Oakwood is £13,200 per place, which is less than half the average cost of current prison places and declared this to be the “benchmark for future costs.”

Private companies are being heralded by the government as the way forward for prison management but the public isn’t being given the whole picture. A report by think-tank Reform claimed in a recent study that private prisons are better at running prisons than the public sector and stated that “12 out of 12 privately managed prisons are better than comparable public sector prisons” at resource management and operational effectiveness. However, what the report doesn’t mention is that three private prison providers; G4S, Serco and Sodexo are all corporate partners of Reform and last year G4S donated £24,500.

The current prison population is 84,305 and the average cost to house one prisoner is around £40,000 per year. G4S prisons are cheaper to run, but is this at the cost of quality and even lives? According to the Howard League for Penal Reform, at least thirty-five people have died in private-run prisons since 2011, fifteen of these in G4S run prisons. Six of the fifteen cases were suicides, three were unclassified, one was of non-natural causes and the remainder were of natural causes. These prisons are counter-productive to rehabilitation and a prison being run at half the cost of a publicly owned prison is not able to provide a higher quality of resources.

The government have made it clear that their reason for building Titan prisons is to deal with overcrowding, cut costs and claim to be modernising the prison service. However, according to The Prison Reform Trust’s 2012 ‘Factfile’, private prisons in the UK have held a higher percentage of their prisoners in overcrowded accommodation than public sector prisons every year for the past thirteen years and prisoners in most privately-run prisons are spending more time locked in their cells.

These Titan warehouses will be counter-productive to rehabilitation, resettlement and safety. Preparing prisoners for release is key to rehabilitation and a vital part of that process is ensuring that they are able to maintain close family ties in preparation for their reintegration back into the community. A Prison Service guideline states that “helping prisoners maintain and develop appropriate community ties and prepare for their release, including by securing future employment and accommodation, is particularly important.”

Building remote supersize prisons, instead of smaller, local prisons will make it more difficult than it already is for prisoners to maintain family relationships, as many are from low-income families and won’t be able to afford to travel the longer distance.

The job of a prison should be two-fold; to keep the public safe from violent offenders and to rehabilitate and resettle prisoners in order to prevent further crimes. Warehouse prisons with a higher prisoner to staff ratio will lead to less opportunities for officers to form positive relationships with prisoners and instead of rehabilitation, ‘crowd control’ will become the focus of daily life on the wing.

A good rapport between prisoners and staff is crucial to rehabilitation and the concern is that larger prisons with fewer staff simply cannot offer the same opportunities for fostering these key relationships. The increasing prison population will leave prison in the same state of despair and desperation as they entered prison, and so the cycle of reoffending will continue and the cost to society, both financially and socially, will continue to soar.

An ex-prison officer who worked in a female prison explained to Mule her strong opposition to Titan prisons. Her major concern is that it will harm on rehabilitation, saying “during my time as an officer in a prison that had a capacity of 550, I found that there were not enough officers on the landings to give prisoners the time they wanted, which therefore has a knock on effect with rehabilitation.”

Another ex-prison officer, from a male prison, spoke of his worries that the staff will be put under more pressure and security will take priority over rehabilitation. “If you minimize the staff, you can’t rehabilitate, there is just too much to focus on keeping the wings secure.” He added that an increase in prisoners without a large increase in staff was a “disaster waiting to happen.”

Many others have also criticised the plans, including Chief inspector of Prisons Anne Owers, who warned that the plans will lead to worse prisons that “complexes flying in the face of our, and others’, evidence that smaller prisons work better than large ones.”

Despite the current unstable economic climate, there are things that can be done, starting with scrapping the idea that bigger is better. We need smaller prisons with a higher ration of staff to prisoners and a strong focus on rehabilitation.

The Norwegian prison system should be upheld as an example of how prison can and should work. Their system works on the belief that rehabilitation is in the public interest as at some point, the prisoner will be released back into the community.

The government should take note before they commence work on their three billion pound zoos. Anyone who thinks that bigger is better in terms of prisons has clearly never been inside one.