The Greater Manchester Campaigns Bazaar will take place on Thursday 27 November 2014 from 7.00pm at Academy 2 on Oxford Road. We’re organising this event as a chance for campaigners and activists in Greater Manchester to introduce themselves and gain more supporters and for anyone interested to become involved with campaigns and learn more about what’s going in and around Manchester. 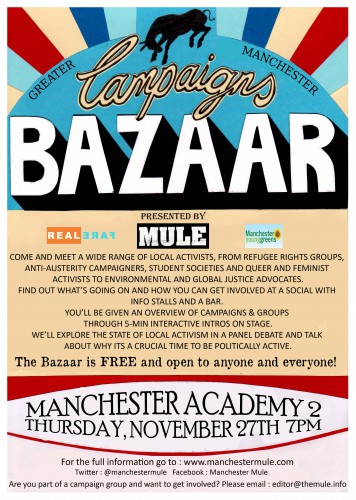 The groups will start with their intros at 7.00pm. From 8.30pm, Kevin Gopal, editor of the Big Issue in the North, will chair the panel debate with the title:

‘What’s Left? Local Activism in the Age of Austerity’

On the panel will be:

– Steve from the Salford Star

– Penny from the Manchester People’s Assembly against Austerity

A wide range of campaign and activist groups will have info stalls at the bazaar and will be able to answer any questions. Groups will introduce themselves on stage with a 3-minute talk, video or presentation – giving a overview of the local campaign landscape.

It’ll be a chance to speak to the Mule team and find out how to become a writer, editor or help out to keep Mule alive.

The bazaar is free and open to anyone and everyone. We want as many different groups as possible to be there and hope for a very broad and mixed audience.