Cornerhouse’s Arab Film Festival continues this summer’s Anguish and Enthusiasm exhibition and film season. In the wake of two years of social upheaval and revolutions (both seemingly successful and failed) in the Middle East, the Arab Spring is one of the clearest examples of a revolutionary situation in the world today and a clear example for more recent social struggles, most notably in Turkey and Brazil. 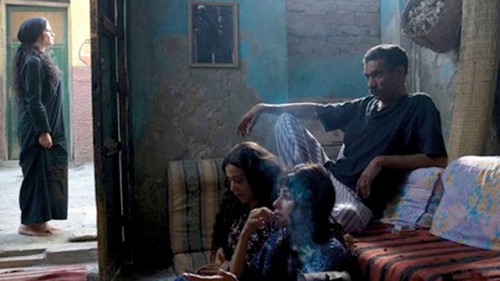 Running from June to the end of July the Arab Film Festival focuses mainly on pre-revolutionary Egypt and explores the web of social and political tensions which underlie two years of upheaval on the Nile.  This selection of films explores police brutality and corruption, religious and secular tensions and economic hardship. Many of the films are also notable for tackling the subject of gender and sexism.

One – Zero is one of those with a focus on sexism in Egypt. Amid the background of a chaotically beautiful Cairo gearing up for Egypt’s African Cup of Nations final with Cameroon in 2008 the (unusually all female) production team have woven several stories tackling social and gender inequality. As the tension in the film ratchets up it is easy to understand where the social explosion of January 2011 emerged from; economic hardship, rampant and systemic sexism and state repression stand out stark and harsh in the lives of all the characters in this film. The nationwide celebrations which follow the Egyptian victory could be read as either a harbinger for the political gatherings of 2011 or a slightly saccharine hope that the tensions in Egyptian society can be avoided or forgotten through (fleeting) moments of national unity. This film leaves viewers with a feeling of unease at odds with the on-screen celebrations it depicts.

Lust, directed by Khaled El Hagar, also deals with gender and sexism in Egypt. The film focuses on the lives of several residents of a poor neighbourhood in Alexandria. When sickness strikes one of the characters, Fatma (played brilliantly by Sawsan Badr) is forced out of her comfort zone with unexpected consequences. As the plot develops we witness the various forms of oppression at play in Alexandria, and Egypt in large, including rampant sexism and economic stagnation and how these play out to frustrate many of the younger characters’ personal desires.

Released just twenty days before the popular uprising of 2011, director Khaled explains that “the pursuit of money and power in the character of Fatma stands as a metaphor for misguided ambition, like with the deposed Egyptian President Hosni Mubarak”. The film won a Golden Pyramid at the Cairo film festival and made it onto the long list in the Academy Awards for best foreign language film.

It is interesting that, despite Anguish and Enthusiasm’s over-arching theme (what happens after a revolution), only one of the films in the festival deals with the Middle East post-Spring. Obviously there is a time lag to write scripts and make films but this also must have something to do with the ambiguous nature of the uprisings. Nobody can confidently argue that these uprisings have been either a success or a failure, or that they have even ended yet. Whilst the focus of the Arab Film Festival seems to be more on the causes than the effects of revolutionary situations the films help provide context to the uprisings through the eyes of the subjects that helped to make them. The festival runs until the end of July and I would recommend trying to catch some of the films – the final film on 25 July, Deep State, was co-written by China Miéville and looks set to be a treat.