George Orwell’s 1948 masterpiece novel has been adapted for stage and screen countless times. Despite the now-past title date, his portrayal of a dystopian, near-future world has a timeless resonance. Yet, in the case of the Royal Exchange’s latest production, the play suffers from being too-well known. Here, its familiar motifs are over-indulged. 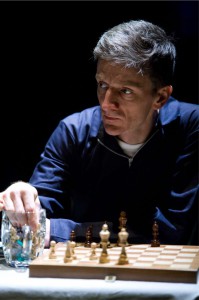 Matthew Dunster’s production, receiving its world premier in Manchester, is too long. While the build up to the pre-interval capture is slow paced it at least has a sense of purpose, painting a detailed picture of Winston Smith and the world he inhabits. The extended, single location torture scene that fills most of the second half is however unnecessarily drawn out.

It may be that the director assumes 2010 audiences are desensitised to images of pain and suffering. Yet the power of the electric shock tactics used here only diminishes as they are reiterated. The emphasis also serves to stress the horror of physical torture beyond that of an entirely captive existence, which is a disservice to the source material.

It is a shame because there are impressive elements elsewhere in the production. Although the era has not been updated, the remembered past feels familiar and, through Winston’s eyes, achingly tangible. Jonathan McGuinness’ Winston stands out in a cast that is impressive throughout, with many actors switching between multiple complex roles. The only weak link is  Julia (Caroline Bartleet), who is suitably snobbish at first but soon seems out of her depth. Her final lines are delivered with such little gravitas they almost loose meaning. Stylised sex scenes also miss the mark: these unusually free and expressive lovers should not engage in repetitive sex.

The staging is successfully ambitious, adapting the Exchange’s round into a channel through which scenes roll on and off. The action is always shifting and with military precision: prop changes are performed in uniform timing and dress. Another masterstroke of staging sinks the ground and lowers the ceiling to create a stark, clinical cell centre stage for act II.

In 2010, “room 101” is guarded by celebrity comedians. The general population seems quite comfortable with the government’s enemies changing names overnight. We are watching Big Brother. Yet 1984 remains an important work that packs considerable punches, regardless of this production’s shortcomings. If that is the strongest recommendation, the cost of the ticket may be better spent on a copy of the book.

1984 is at The Royal Exchange Theatre until 27 March