Theatre Review: A Night on the Tiles

If Quentin Tarantino was a Mancunian drama teacher, A Night on the Tiles might be his breakthrough play. It is an audaciously scripted homage to Reservoir Dogs-inspired gangster posing and Kill Bill Vol.2 chop-socky, which balances humour, inventiveness and style. 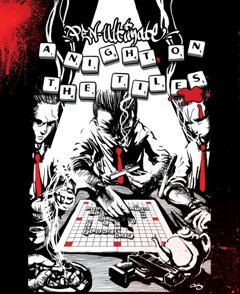 We are welcomed into a seedy underworld of backstreet, high-stakes Scrabble, lorded over by Harry, who bakes scones and garrottes cheaters with his tile rack. On the encouragement of his loyal cohort Scroupier, he invites Triple Word, Blank Slate and Tyler Bourbon to a match to end all matches, proving once and for all who is king of the board.

The plotting, drawing heavily on cinematic conventions such as flashbacks and replayed scenes, is tight, aided by a clever set design that seamlessly integrates video elements. The audience is always aware of the two – or more – sides to each scene. As with all classic gangster tales, a character’s perception of what is going on is usually mistaken. A double, or triple-cross, is never far away.

A Night on the Tiles is the first full-scale performance from Pen-ultimate, a company of MCs, spoken word artists and performance poets which emerged out of the prestigious Contact Young Actors Company. The cast, who collaboratively wrote the play, have crafted a rhyming, word juggling script. It is the creative highlight of the piece, drifting between erudite in-jokes and bolshie slang without jarring the pace at any point.

The slickness of the script is undone at times, however, when overemphasis is placed on winks to the audience. These work for the most part, and get laughs, but off-stage hands thrusting through curtains to hold out props seem unnecessarily amateurish. It is only a slight gripe with an otherwise inventive play with blistering verbal performances throughout. On this evidence there will be much more to come from Pen-ultimate.

A Night on the Tiles is at Contact Theatre, Oxford Road until Saturday 13 February