Theatre review: Confessions Of A Waitress

The inaugural Nowt Part Of Festival took place from 8-14 July this year. Here, MULE reviews one of its productions. 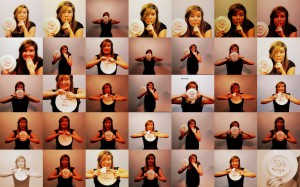 Being a waitress isn’t a world away from being an actor. On a practical level, many aspiring actors will find themselves waiting tables at one time or another. But more than that, it’s all about playing a role: you’re the customer’s confidante, the patron’s pal, the casual flirt after work or simply someone with whom they can have a row. But what do they really think about you when they’re not in character? In Stephanie Claire’s Confessions Of A Waitress we are promised a peek behind the smiley face on the receipt, a look at the hidden thoughts and feelings of serving staff.

For starters we are seated at tables and menus are distributed. Claire talks us through her various personalities, the characters she plays, how she reflects back at the customer what they give to her. The changes are rapid, as she snaps from one role to another, running through at-table patter like an actor’s warm up exercises.

The main course is a stew of stories about customers. Two old ladies come in and heckle anyone who isn’t their favourite, especially when they don’t know by rote how many sugars go in the coffee. A proposal has both the bride-to-be and the staff moved to an emotional crescendo. A couple of lecherous old men offer unwanted sexual advances. Some customers become real friends and some are dreaded, while others are simply avoided altogether.

For dessert we get an insight into the process behind the show, as Claire returns to the stage for a Q&A. She talks about how the show came together, which parts were true (all of it), and what she plans to do next. Not so much confessions of a waitress as insights of an actress, but good nevertheless.

Immersive one-person shows live or die by your willingness to invest in the character, and Claire is so likeable that she had the audience on her side. The stories were interesting and the bond between herself and her customers touching. The show could have done with more focus, as none of the stories were quite filling enough, but on the whole it was a rewarding repast. The takeaway: waitresses hear more than you think, feel more than they let on and you don’t want to get on their wrong side if you can help it. Oh, and a good tip can’t solve everything (but it can’t hurt).