In 1997, Garry Kasparov arrived in New York City for the greatest challenge of his life. His opponent wasn’t a fellow Grandmaster but a faceless super-computer called Deep Blue, built by the tech giant IBM. The match was arranged by IBM in order to raise its company profile and stock price and Kasparov picked up the gauntlet in a bid to become the greatest chess player that ever lived, better even than his own idol Anatoly Karpov. What he didn’t expect to confront was the single-minded determination and logical genius of Deep Blue’s inventor Dr Feng-Hsiung Hsu. 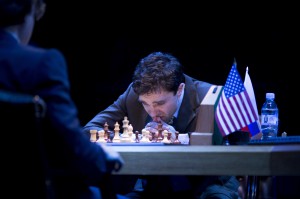 There is more than one difficulty in writing and staging a drama like this, the most obvious being that the ending is already known so the journey towards the end must be all the more tense and dramatic. The second difficulty is one of the protagonists is a machine and it is difficult to assign any kind of personality or character traits to an automaton, especially when interaction between the two main characters is forbidden. Finally, there is the problem of making chess, played by a computer, interesting to anyone who may not be interested in either.

As far as the last point is concerned the play works remarkably well. The difficulty of making the machine itself interesting is overcome by concentrating on the characters that created it. Kenneth Lee plays the über-geek Dr Feng-Hsuin Hsu with just the right amount of charm yet is as quietly committed and forceful as Kasparov himself, especially in the scene where he is negotiating his contract with IBM. Counterbalanced by Trevor White and Brian Sills as Murray Campbell and Joel Benjamin respectively, the trio of IBM representatives give a human face to the cold autonomy of Big Blue.

There are some really clever constructs in staging and scene changing that hold the audience’s attention. The play opens to the audience being spoken to directly by the sports commentator Mandy Dinkleman, played with just the right amount of smarm and cheese by Phil Nichol. Staged like a cross between a mid-afternoon game show and a heavyweight boxing match the scenes flit between the match itself, the meeting of the creators of Big Blue and their growing collaboration, the childhood of Kasparov and his first meeting with his idol Karpov, the courtship of Dr Fen-Hsuin Hsu and back to the big match, covering a time span between 1973 and 1997. 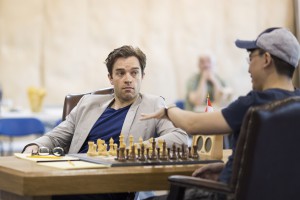 Holding all of this together is Hadley Fraser’s central performance of Kasparov himself. Already media savvy and with the cocksure arrogance of his own success, Kasparov is hungry for Western freedom and all its trappings, a hunger that is kept in check by his dominating and sometimes overbearing mother Clara, played with a cool understatement by the accomplished Francesca Annis. It is some achievement to bring out the hubristic and over-confident nature of Kasparov while still making him ultimately likable and sympathetic and, for his part, Fraser gets into the role with a real gusto, bringing out a very real Kasparov charisma.

A couple of minor criticisms. A lot of the technical dialogue eluded me but I’d be the first to accept that is probably a shortcoming on my part. Being the least technical and IT literate person I know, some of the dialogue discussing the capability of the machine itself may as well have been delivered in Russian. However, the nerdy guy sat next to me with the collection of eight different coloured biros (yes, I counted them) in his breast pocket seemed to follow it and nodded approvingly in all the right places so I guess that even though it may not be compelling, at least it was technically accurate and the Big Bang Theory style humour went a long way towards alleviating my failure to follow it.

I also thought the play was overlong. It’s a lot to maintain the tension this kind of work demands for over two hours and I felt that at times the tension flagged. Overall though, this is a well written and thoughtful work that addresses the question of man versus machine in a refreshing and modern way.

Back to that first point I raised, the one about the ending being known in advance. If you don’t know how the Kasparov versus Big Blue match turned out then I’m not going to be the one to spoil it for you. If you do, then the final scene is still great.

The play ultimately tells us that it is not simply a matter of the flawed genius of man against the cold intellect of a soulless machine but the mind of a man versus the mighty and faceless body of the corporation behind the machine. That is where the real power of this play lies, and makes it a parable for our times.

The Machine is part of Manchester International Festival and runs nightly at Campfield Market Hall, Castlefield until 21 July 2013, with matinee performances during the final weekend.