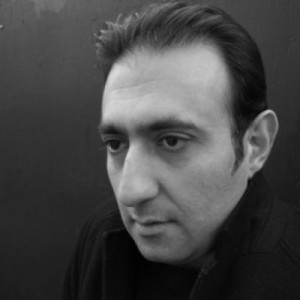 I was only born in 1989. I don’t remember Soda Streams; I had a lava lamp as a child, but was roundly considered outdated and uncool for it (and, I suppose, for other things). Top of the Pops had already started its slow decline by the time I reached television-watching age. I don’t own, nor have ever owned, a single Ultravox record, cassette, 8-track, CD or mp3 file.

One might think, therefore, that I wouldn’t have much connection with Mike Francis Carvalho’s Vienna, performed here as part of the biennial Nowt Part Of festival of which Carvalho is also artistic director. And as the play opens with Annabelle (Sharon Heywood) getting herself a self-carbonated drink, soaked in sickly luminescence, I admit I felt somewhat out of place.

Thankfully, Vienna is much more than just a celebration of the 80s. The play consists entirely of a conversation between Annabelle and her ex-partner, Barry (Amir Rahimzadeh), which digs up the demons of their respective pasts and juxtaposes the respective ways in which they cope with those demons. Vienna pits quixotic idealism against bitter disillusionment, as the increasingly drunken Belle tells the semi-delusional Barry that no, she doesn’t’ want to get back together, no, she doesn’t believe the world is one big music-video, no, he isn’t called Midge Ure and, no, he’s never been part of Ultravox.

The chemistry between Rahimzadeh and Heywood is ethereal, as is the fluency with which they interact. Helped by an outstanding script in which seeming tangents are discreetly holistic, both actors shine brightly. Heywood’s descent into inebriated spitefulness is natural enough to make it scarily recognisable, while Rahimzadeh’s portrayal of Barry, bouncing between maniacal optimism and angry confusion, is award-worthy. Prominent, too, is the play’s ending in which the two characters are offered an indefinite moment of reconciliation and hope as Ultravox’s famous track fades out.

There is little not to like about Vienna. Even those oblivious to the magic and misery of the 80s will identify with it. Ultimately it is about human reaction and resilience to the pressures imposed by life in general, an idea that transcends the niches of any particular decade.