Twisted Wheel to be demolished

Legends, one of the city’s major alternative LGBTQ venues and once home to the famous Northern Soul club Twisted Wheel, is to be demolished to make way for a hotel. 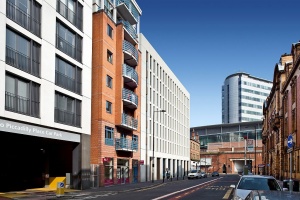 A sketch of the intended Motel One development

Plans to tear down the building in favour of a 330-bed ‘Motel One’ chain hotel will now go ahead after councillors and planning officers approved the scheme at a town hall meeting yesterday.

Northern Soul lovers, members of the LGBTQ community and city centre councillor Kevin Peel had joined a campaign to save the club.

Supporters argued Legends was a vital part of Manchester’s cultural life due to both its musical heritage and as an alternative to what some “Reclaim the Scene” campaigners see as an increasingly commercial and homogenised Canal Street. As the Twisted Wheel the club brought huge American acts to the UK including Ike and Tina Turner, John Lee Hooker and Edwin Starr.

Developers had previously considered keeping the basement area of the club, but rejected the idea on the grounds it would not be “compatible with the hotel use on the site”.

One club goer, Jack Broadbent, reacted with anger at the decision to allow permission for the development. “If there was one council in Great Britain that wouldn’t have put finance first I’d have hoped it’d be Manchester” he told the planning committee, and claimed scepticism at the need for further hotel spaces in the area. 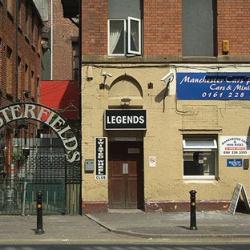 Officers acknowledged that as the birth place of Northern Soul the Twisted Wheel “yields communal value associated with its perceived identity and social interaction”, adding that “in recent years the social value of the club complex has changed as a result of the focus on gay and lesbian club nights”.

The council’s planning committee supported the demolition on the grounds that the £25m – £30m scheme would “provide essential tourism infrastructure in the city centre” and receive 120,000 stays each year. Officers also argued the project would provide jobs and reinforce the “high quality regeneration and development that has already taken place in Piccadilly Place”.

Piccadilly Place is an adjoining “mixed use” hotel and office site owned by American private equity giants the Carlyle Group. The complex includes 300,000 square feet of grade A office space, of which 180,000 is available to let according to the area’s website. The development also enjoys a form of public subsidy through two existing public sector tenants, Transport for Greater Manchester and the NHS Strategic Health Authority. 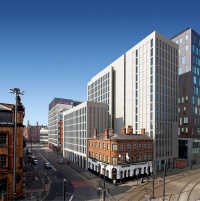 The committee noted that the heritage values of Legends were “not considered to be of sufficient special interest to warrant statutory designation of the buildings”. A bid to grant the building listed status was rejected by the government on the grounds that it did not “possess special architectural interest within a national context”.

An advisory body to the council’s planning panel raised further concerns over demolishing “a good quality group of Victorian buildings” in favour of extending the prevalence of “over dominant, high-rise buildings” in the area near Piccadilly train station.

English Heritage also opposed the development on the grounds that the 14-story hotel would cause “substantial harm to the setting” of the nearby London Road Fire Station, a grade II listed building. Planning officers claimed the hotel would act as an “understated foil” in comparison to the Fire Station’s “sheer architectural scale” and “dominance” of the surrounding area.