It is not uncommon in Manchester to find different kinds of performers side by side on the same night. You might see a performance poet followed by a singer-songwriter at Fuel in Withington, or a burlesque dancer upstaged by a six-piece blues band at Islington Mill. Rarely, though, does a night come along that aims to fuse different media and with such interesting and successful results as Video Jam at Antwerp Mansions. 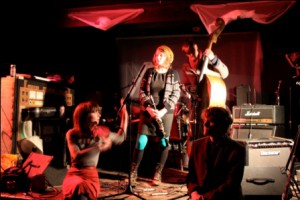 The experience of Video Jam is as compelling as its premise: “an experimental night of short films with a variety of live musical accompaniment”. Filmmakers of any ilk submit silent short films to which a musician, band or poet provides a live audio accompaniment. The filmmakers have no say over what kind of score their pieces get and the films were chosen for the musicians, largely at random.

Sarah Hill is one of four organisers of Video Jam, a graduate from the University of Manchester and now an art foundation student at Manchester Metropolitan University. The original idea came to her from an opening she went to at the Whitworth Gallery, where an animation was scored live by two musicians. She told me how she had explained to another Video Jam organiser: “I know I want to do something with film and music, but I’m not sure what. I’m a filmmaker and he’s a musician, I thought ‘we can do something together’.”

The event was held at Antwerp Mansions, a large building just behind Rusholme’s curry mile. Originally a Belgian consulate, the imposing Victorian structure became a Conservative club in 1924, before being abandoned and then squatted. It’s now a licensed venue and a hangout for artists, musicians and others. Unlike the squat-inspired faux-eclectic aesthetic of commercially successful chains like Trof, Antwerp Mansions seems the real deal. Grand Victorian architecture and original mouldings – the period features remain largely intact – are now home to a mad mix of paintings, pornography, murals and a flea market-esque collection of furniture; the stage itself is made out of vast antique pool tables pushed together.

The team behind Video Jam had laid out tables and chairs with dark red table cloths and tea lights in jam jars were dotted across the room, giving the feeling of a speakeasy during prohibition, or the hideout of a revolutionary fraternity. I half expected maps detailing an upcoming siege to be projected onto the large white sheet that hung on one wall. 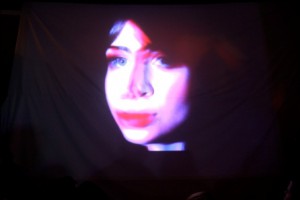 The night began with two short films by lecturer Dave Griffiths, the first a cigarette in black and white burning to the filter and the second a collection of white dots and scratches taken from the controversial 1915 film The Birth of a Nation and accompanied by sparse, atonal scratching on an electric guitar by Anton Hunter. From its highly experimental beginnings, the night unfolded as an exploration of film and music without restraint. There were highly abstract and graphically driven pieces, films with a narrative, featuring actors and there were films using found footage, spliced and edited to create new art.

The music was an energetic mix of instruments; guitars, wind, brass, strings, piano and instruments neither I, nor the music buffs I was sat with, could even name. While the majority of the scores worked well, I wished some had been a little more adventurous. In some cases it seemed as though the musicians were content to recreate the films in musical terms, rather than trying to add their own commentary or counterpoint.

The most successful collaborations were always when the music brought something unexpected, challenging and wonderful to the film. Anne Lister’s film The View From Jupiter accompanied by Sophie James was one such success. Although the film itself was beautiful – a series of orbs travelling across the screen – the musical accompaniment added a dimension, which was at once elaborate and captivating and gave the illusion of visual complexity. 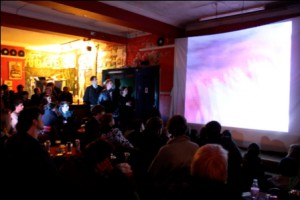 Musician Adam Hart, who performed a rich electronic score for a short film of a car journey at night, explained that “when film and music mix together and the result is more than the sum of their parts, it creates an extra dimension. Music and moving image should complement each other”. He conceded that “it’s easier if [the film is] abstract- there’s less of a demand for synchronicity”.

Sarah Hill, whose own film Funes, the Memorious, scored by Michael Seal was another highlight, said “I have a particular interest in filmmakers and musicians who are working in a genuinely experimental way, who don’t worry about convention, and value improvisation; the idea of chance or happy accidents”.

Indeed, what gave the night its feeling of freshness and scope, was the sense of experimentation. When Helen Knowles’ submission was aired – found footage of an unassisted childbirth – it was played twice, once without music as “an experiment”.

The night was not without its hitches; technical errors interrupted a few of the screenings and at one stage, while I spoke to enthusiastic organisers Sarah and Sam Hughes they had to run off to replace the screen, which had been pulled down. But again, the crowd was supportive and their teething issues will no doubt be smoothed during Video Jam’s future at the mansions.