Up to 500 people rallied in Manchester’s Piccadilly Gardens this Saturday to protest the introduction of the government’s hated “bedroom tax”. 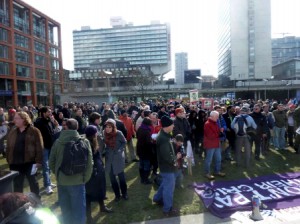 The rally saw around 200 people march before more gathered in the city centre square. Speakers warned that the cut, expected to hit over 12,000 people in Manchester, would cause intense hardship for people with disabilities, lone parents and those out of work.

Tria Hall, a West Gorton resident who spoke at the rally, told Mule that her Phoenix Tenants and Residents Association was planning an organised boycott of the tax.

“There are no one-bedroom houses in our area anymore because they didn’t build any to replace the ones they were knocking down”, she said. “We can’t downsize, most of us, because they were [disability] adapted flats as well and most of us who’ve had adaptations have had to build it from scratch.”

Hall, who uses a wheelchair, said the lack of smaller properties to downsize to had left her and her neighbours in an impossible position. “If they tried to downsize all of us there’s just nowhere to go so this is why we’re running a boycott of it.”

“I have some neighbours who have been looking for jobs for years at this point because they only get six months at a time temporary contracts. I have a neighbour who took eight months to get [Criminal Record Bureau] checked for jobs he applied for, so he lost them.

“It’s all people like that who can’t afford to pay. So if they’re taking the money off us with which we would have originally paid it I don’t know how they expect us to try. I could probably, if I went without more meals, but I only have one meal or two a day. I’m not aware of where I could cut it from.”

Hall said tenants had not received much help from Manchester City Council or housing associations. “I’ve had a leaflet from the housing association asking how we intend to pay it, mentioning that there are discretionary housing payments which I know won’t cover 20 per cent of the whole lot of us.

“And that’s all we’ve had, no support otherwise yet. I don’t know if they’re planning any but I haven’t heard anything.”

Organised by Labour activists, speakers at the demo included Labour councillors, trade unionists and other campaigners – though several present criticised Labour’s own record on welfare and housing.

Michael O’Brien, an activist from the Irish Campaign Against Household and Water Taxes, a property charge in austerity-hit Ireland similar to the bedroom tax, argued that people could not depend on politicians to support them. For O’Brien, direct action was needed.

“We can’t wait for a change in government”, he said. “We cannot wait for legislative change. People are being criminalised.”

O’Brien warned that an attack on the living standards of ordinary people was not just occurring in the UK. Governments and finance ministers may bicker, he said, but “the one thing they do agree on is that working class people across Europe have to pay for a bankers’ crisis.”