A new public library appeared for the afternoon on the lawns of Manchester’s Piccadilly Gardens. 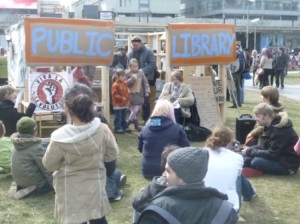 Children heard a spirited reading of The Cat in the Hat Comes Back, Where the Wild Things Are and the Gruffalo, complete with a Gruffalo impersonation, in a “pop up” library built to protest library closures.

The flatpack facility was the brainchild of campaigners from neighbourhoods across Manchester including Northenden, Levenshulme, Burnage and Fallowfield fighting to keep their libraries open.

Subject to consultation, up to six libraries across the city could go in the latest round of £80m cuts implemented by Manchester City Council after the Coalition government slashed its funding. A replacement library will be built in Levenshulme – but not for two years.

Levenshulme activist Valerie O’Riorden told Mule that campaigners had not heard confirmation whether the new library would be a like-for-like replacement. “And with the other libraries who aren’t getting a replacement facility in Burnage or Fallowfield or Northenden” she said, “they’ve heard nothing.

“As far as anyone’s concerned the libraries are shutting and they will be replaced with an outreach service and maybe a book collection point in a shop or something.”

She added that few details had been forthcoming from the council while the consultation on their future was ongoing. “Because the consultation period’s going on they won’t comment freely, they’re just saying they’re listening. Whether they are listening or not is debatable.”

More community facilities in Moston will also go with the closure of Broadway Swimming Baths.

Pools in Levenshulme, Withington and Miles Platting were to close but have been reprieved following public outcry and campaigns featuring occupations, petitions and protests.

Withington will be kept open through a mixture of local residents raising funds and CASH grants, a community funding programme operated by the council. Levenshulme and Miles Platting will be propped up through public health money and CASH grants.

Announcing the turn around, the council’s deputy leader Councillor Jim Battle said, “The commitment we’ve seen from communities to these facilities has been impressive. 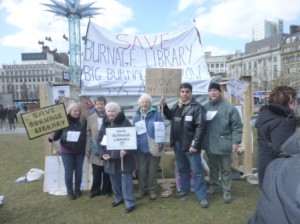 “The council has listened carefully to what communities and councillors have been saying during the consultation. We have worked together with them and it’s now possible to put forward interim solutions for Miles Platting, Withington and Levenshulme.

“However, despite extensive efforts it hasn’t been possible to find a workable solution for Broadway. We remain committed to working with the community to develop new pools and, in the case of Broadway, to support access to alternative facilities.”

Welcoming the news that Levenshulme baths would be kept open, O’Riorden said she was “delighted” and “really happy that they’ve given us a reprieve for the two years”.

She expressed concern over any attempt to tie the future of the baths to community funding however, pointing out that “we live in a deprived area, it’s a public service, the community should not have to campaign for it.” 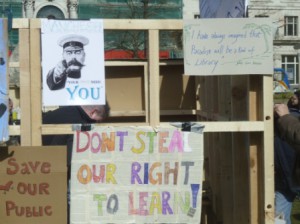 But she argued that “even a compromise with the baths staying open is better than them shutting it. It’s a success with some grey areas but it’s staying open and for the people who use it that’s the main thing and we’re delighted and we hope we can do the same thing for the library.”

She voiced strong criticisms of the government’s programme of spending cuts, insisting that “Austerity does not work. The cuts to public services are just one part of the austerity programme which Labour councils are passing down from the Tory-Lib Dem government.”

She added, “We were sorry to see that the council did not make a stand against those cuts when they passed their budget a couple of weeks ago and the people in areas like Fallowfield and Northenden and Levenshulme and Burnage are paying the price.”