We may be working harder, but we’re not all living longer 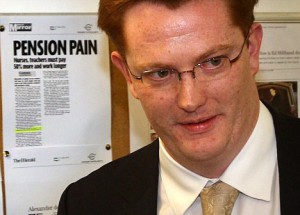 But as with many elements of the cuts and the drive towards austerity the working class and the poorest are not all in this together with the rich. It is simply misleading to say that “we are all living longer”, since poverty and the ravages of long-term unemployment and low-paid work have meant that alarming gaps have arisen in the average life expectancy in different regions.

Taken as a national average, Alexander is telling the truth – life expectancy from birth, based on 2008/09 figures, is 77.7 years for men and 81.9 years for women, and so a person retiring at 66 would still have a good run. However, closer inspection shows that this is not true for the poorest parts of the UK, in particular Manchester.

According to figures released by the Office of National Statistics earlier this month men in the city have only a 54 per cent chance of living to the age of 75, with women only having a 69 per cent chance – both being the worst in England and Wales. Neighbouring Salford is close to the bottom, with men having a 54.5 per cent chance to reach the age and women 68.4 per cent.

In Manchester this translates to a life expectancy of 73.4 for men and 78.9 for women, while in Salford it is 74.6 and 79 respectively. Manchester is consistently the worst in England and Wales. In terms of UK results, only Glasgow is worse.

This has a lot to do with poverty. Despite the “regeneration” of Manchester destitution and child poverty is still endemic, with the city the “child poverty capital of Britain”. East Dorset, a retirement hub for the affluent, is a high performer, with men expected to live to 81.3 years and women until they are 85. In Kensington and Chelsea, the best performing Local Authority in the country, women can expect to live to an amazing 87 years, with men not far behind at 83.7. Five years ago, a report found men from the most deprived areas are 2.8 times more likely to die between the ages of 15 and 64, and women 2.1 times.

Thus public sector workers and those drawing a state pension will have a year taken from them, justified by the incredibly high life expectancy of the country’s richest dragging the average up. The richest are also the least likely to require a state pension, or any of the other aspects of the welfare state currently under threat. Alexander’s statement, and similar sentiments echoed by the right-wing media, are deliberately disingenuous.