Legal aid campaigners have urged Manchester City Council to restore funding to its advice services, as Greater Manchester braces itself for millions of pounds in benefit cuts from next April. 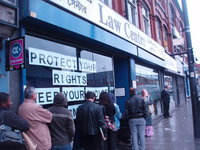 Pressure to defend access to legal advice in the face of “lethal” cuts mounted on the council at a fringe meeting attended by 100 people during the Labour Party conference.

Shadow justice secretary Andy Slaughter MP told Mule that campaigners were right to “put their Labour councillors, as well as other party councillors, on the spot” about cuts to local authority advice services. “They’re not an add on or an additional extra”, he said.

Access to Advice campaigner Margaret Manning explained that campaigners wanted to build a better advice system, and not just return to the “bureaucratic time and money wasting system” imposed on law centres and solicitors under previous governments.

All in the room agreed reforms to legal aid were important. More pressing was the question of what can be done now to preserve access to the law, as the welfare state faces sweeping changes.

Manning said she wanted the council to “join with us in campaigning against the government” rather than to simply manage financial cuts. “People are going to genuinely suffer if they can’t get proper advice”, she said, pointing to cuts such as the closure of the council’s in-house Manchester Advice service in 2011.

Of the politicians present, Willy Bach, a Labour front bench peer who led opposition in the House of Lords to the Coalition’s Legal Aid Bill, came closest to setting out such a strategy. “I hope we’re not going to be too reasonable. This is every bit as bad as the NHS bill”, he said.

Bach claimed that the Legal Aid Act passed before parliament last April would require several “statutory instruments” before it becomes law, presenting an opportunity to blunt the legislation. Slaughter was keen to praise his colleague, saying he felt the bill is at “as important a stage now it’s gone through parliament as it was when it was going through parliament.”

Slaughter did not reveal what he would do, or what policies Labour might present before the next election, although Wigan MP and former St Helens Citizens Advice Bureau executive Yvonne Fovargue argued local authority-funded services should receive a statutory ringfence from cuts.

Manchester Labour councillors in the room were dismissive of claims they could have done more to protect the city’s legal advice. “It’s easy to say the council can pick up the tab”, protested finance executive Jeff Smith. “We’ve just got £80 million more cuts. We cannot fund what the government is taking away”.

Such protests cut little ice. One attendee said, “I’m a mental health nurse. And I came tonight because I feel really angry about what’s happening … I came hoping that there would be a feeling of anger and dissent here and that people would be moving on from this and we’d be doing something about what’s happening. I don’t get that feeling.”

Another, an asylum lawyer who “took great cheer” in the “energy from people here”, labelled the politicians’ response “utterly inadequate”. He added that he had “very little faith that anything will be done to defend the rights of justice, and when you talk about access to justice, you are talking about decisions which are potentially life or death.”

Slaughter disputed the accusations. “We’re all aware of suffering”, he claimed, and expressed hope that the potential unlawfulness of cuts to certain benefits including the Independent Living Fund could be challenged through judicial review. He was met with scepticism. “Can you test it in the courts before they scrap us?” one woman reliant on disability benefits asked.