Homeless rights activists have disposed of their self-appointed leader Wesley Hall. The revolution within a revolution is an attempt to end the damage being done to the homeless rights movement by Hall’s questionable character and ‘leadership.’

Manchester Angels founder and ‘leader’, Wesley Hall, has been kicked out of the squatted Stock Exchange building on Norfolk Street by fellow activists. In the early hours of Wednesday morning, Hall was forcibly removed from the site after just ten days of what has been described by another activist as his ‘dictatorship.’  Activists and residents of the temporary homeless hub, owned by former Manchester United player Gary Neville, stated they had grown tired of Hall’s ‘leadership.’ They claimed that he was refusing to allow homeless people to enter the site, while at the same time using intimidation and force to maintain his power and remove homeless people from the building. Hall has refuted these claims, blaming the right-wing press for attacks on his character. 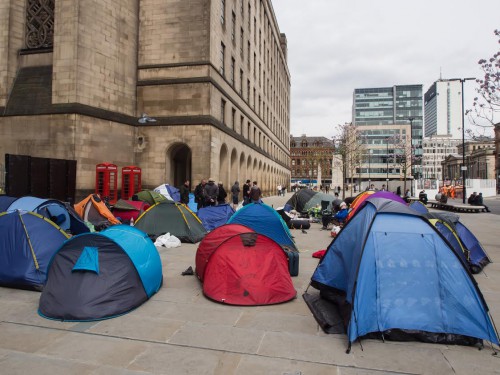 The Stock Exchange, renamed the ‘Sock Exchange’, was squatted by homeless people and activists on the 17th October following a court order giving them 24 hours to leave the building they were then occupying on Charlotte Street. Manchester Angels, led by Hall, were involved, as were the Love Activists, a group well known for their attempt to use the Bank of England building in Liverpool as a shelter for the homeless.  However, after ten turbulent days Hall lost the support of the Love Activists and faced criticism from many others both outside and within the building.

The occupation began almost like a miracle when owner Gary Neville, who is planning to turn the building into a luxury hotel, told the squatters that he was happy for them to stay until February. Despite this unexpected gesture, problems began just two days later.

On Tuesday 20th October, police were called to the site after a window was smashed and people had been trying to break in. Several homeless people set up tents on Market Street and claimed to have been kicked out of the Stock Exchange.

One of the group, Wesley Dove, stated: “We were told to come back later that day and then they kept telling us later times. I went mad. It’s not right. All of us homeless were outside while all of our stuff was in the building – blankets, clothes. And we were just stood in the pouring rain while ‘activists’ were in the building nice and dry.”

Wesley Hall responded: “There have been episodes of violence and we cannot have that in the same building as vulnerable people.” Neville began employing a security firm to protect the building between the hours of 9pm and 7am.

On Friday 23rd October, The Sun newspaper published an article entitled ‘Neville’s squatter is racist footie yob’, claiming that Neville’s ‘kindness’ was being ‘exploited by a thug’, and listing several of Hall’s violent convictions.

Hall responded via social media claiming the article was the “right-wing press” trying to “do a hatchet job”, and attempted to downplay claims made by his ex-girlfriend, stating: “the fact that this particular ex has sold a snide story to The Sun is laughable.”

Hall has stated that “The Sun and the other rags have breached the Rehabilitation Of Offenders Act, as the offences were more than 2 years old”, and that “there will be serious repercussions for the journalists”.  This seems to be incorrect as, according to the Act he refers to, there is a buffer period of 4 years beyond the sentence imposed before the conviction is judged to be spent.

Details of the incidents that lead to him being jailed can be found here and here.

Later on the 23rd, ‘Manchester Street Angels’, a CNI registered charity that works alongside GMP to make the city safer for vulnerable young people, issued this statement: ‘To clarify our position, we have NO association with Mr Wesley Hall or his “Homeless Projects”. The confusion is damaging to our charity & the good work we do. We would like to invite anyone to research the groups, contact & question us & invest in the official street angel project for Manchester.’

For the next 3 days, amid reports from other activists inside the building that he was becoming increasingly paranoid, Hall posted a request for private security firms on several of his Facebook accounts. This request came despite the fact that Neville was already employing security to help protect the building. 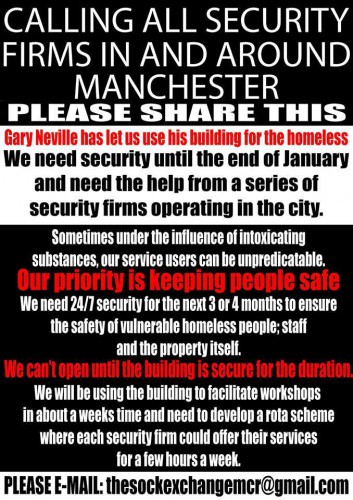 Furthermore, statements from fellow activists raised questions about the occupation’s leadership and the safety of the squatters. Withdrawing their support for the project, The Love Activists stated: ‘We feel the occupation has been tarnished by the “Leadership” of a few… Autonomy is not being respected, and we cannot condone hierarchy or discriminatory behaviour. We believe this could be putting vulnerable people at risk.’

They emphasised that their withdrawal of support was based upon events inside the Sock Exchange, not on allegations regarding Hall’s past or ‘smearing articles in certain right-wing press’. Confirming their issues with Hall, they stated: ‘Currently, there are no homeless people “allowed” in the building, as Wesley Hall hasn’t ‘Opened’ it to them yet. They are all sleeping on the streets.’

In the early hours of the 28th October, Hall was forced out of the building by Neville’s security. Hall himself admitted:

Local activists claimed he was seen “punching himself in the face” outside the Sock Exchange. Concerns have also been raised over previous homeless projects Hall has led in the past and many are questioning his online fundraising activities.