What’s the sequel for Manchester’s libraries?

After months of flash mobs, petitions, occupation and protest six local libraries in Burnage, Fallowfield, Levenshulme, New Moston, Miles Platting and Northenden are having their funding withdrawn by Manchester City Council. What will the promised new “community” service look like?

At first glance the changes appear to be a sensible way for the council can begin to tackle the £80 million  it needs to save thanks to government cuts between now and 2015. Outreach provision, renovation of the Central Library and online resources sound like positive changes to the existing system.

Unfortunately these changes are unlikely to result in utopian community collectives, straight from the pages of Cameron’s “Big Society”  but instead will  not work for some of Manchester’s most vulnerable citizens.

Proposed outreach programs and community book collections will in reality consist of “unstaffed small book provisions” with “some ICT provision” run in practice by volunteers managed by either community groups or external organisations such as housing associations. Just seven hours per week will be allocated to each group for trained staff to assist in guiding and developing the library facilities.

The Borrowers Clayton Community Library, which has been running as such since 2011 and has been heralded as the  exemplar for community run initiatives, is only open six hours a week due to lack of volunteers. Similar projects may lead to similar difficulties, creating lack of public access.

Levenshulme’s campaigners have won success in preserving their services, with a local high school agreeing to keep facilities open to the public on weekday afternoons and Saturday mornings and keeping sessions including children’s activities and language classes until the library is integrated with the leisure centre in 2015. While access to resources is certainly restricted compared to what went before, campaigners have celebrated their victory in preventing closure. 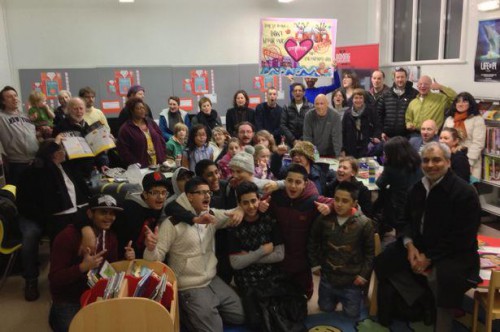 Inside the Levenshulme Library occupation

Prospects for Northenden library seem bleaker. Northenden will retain a small outreach facility operating in conjunction with Wythenshawe Community Housing Group that will hold a ”small collection of books” to be reserved online. Which is not helpful if you don’t have access to or the digital skills required to access the internet.

How often the library will be open and for how long has not been spelled out and many locals are not satisfied. “Nobody here is impressed” said campaigner Graham Phelby, who accused the council of a lack of meaningful dialogue about what Northenden needs. “The space chosen at ‘parkway green is just a third of our library which is a portacabin as it is”, he argued.

Executive councillor for Culture and Leisure Rosa Battle said the council would “working closely with the community and our partners to make this outreach facility a success and we envisage volunteers helping out when it is up and running.” Yet sustainability is the main question hanging over the planned schemes and it would be interesting to know how the council foresees these enterprises functioning in the long term.

There is a clear risk that communities will be continually forced to chase small quantities of funding in order to stay afloat, which will ultimately end with them grinding to an ungracious halt. And although communities are being charged with the responsibility of running book libraries that does not mean they will have control over the decision making process, as ultimate ownership remains in the hands of the council.

The council argues that community book collections are in addition to the fact that 99.9 per cent of people live within a two miles of a library and therefore able to access further support if necessary. This statement disregards the needs of the most venerable community members such as the elderly, disabled and those with children, for whom travel may not be a viable option. Council reports used to justify closure of the six libraries on grounds of lack of use have come into scathing criticism for dubious use of statistics, with Burnage campaigner Ethar Alali accusing officials of a biased data analysis weighted “massively in favour of the larger library catchment areas and wholly against the neighbourhood libraries.”

Driving libraries and the professional librarians from local environments removes one of the few spaces not only of individual education but also of community development and dismantling the provision of a secure and politically, culturally, religiously neutral place in which to meet and discuss. No matter how successful a postal system or virtual online library may become, such environments cannot replace local library space.

If these schemes do not provide communities with benefits and are not welcomed, with 60 per cent of the 1008 people asked for a council designed questionnaire disagreeing with the changes and 12,000 signing a petition against the developments, it is difficult to conceive why these plans are going ahead. While the council needs to save itself a lot of money, removing funding from these libraries will save around £500,000 a year – an amount that contrasts with some frivolous spending decisions, such as the £3.5 million Library Walk “glazed link” between Central Library and the Town Hall.

Some, such as Manchester Green Party chair Deyika Nzeribe,  argue that the reasons are twofold. Firstly to consolidate an image of the collation government as the antagonists in local issues, providing an easily targeted body on which to place sole blame for cuts to welfare services. Secondly to promote the Labour council as successful leaders, striving and achieving high profile projects in the face adversity.

Nzeribe further claimed there was a political reason behind the selection of the six libraries were chosen for decommission- some of them are situated in strong Labour Party seats the council’s ruling group is less likely lose control of –  and drew parallels with the expansion of the Manchester Metropolitan University, relocated from Didsbury to Hulme after opposition from Didsbury residents. 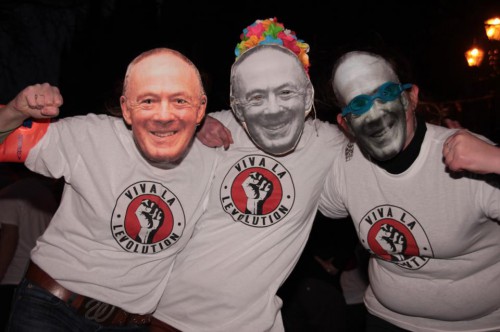 Levenshulme campaigners donned Richard Leese masks at a protest to save their baths and library. Photograph: Tony Gribben

It’s unclear how convincing an explanation this is – surely the council do not need to go to great lengths to vilify the Conservative-led government? The government have managed that on their own. And the political views of Mancunians may be more complex than councillors or their opponents recognise.

But whatever the council’s motives, it is important to note  the worrying lack of democracy with how the council implements its projects. Despite formal statements of opposition being noted within the council’s ‘consultation report’ of 17 May, no changes apart from a cancellation of a definite date for funding withdrawal have been made.

Accounts from those present at the council’s Executive meeting show senior councillors pushing through concepts without consideration of the alternative suggestions put forward by community groups. Save Burnage Library campaigner Ethar Alali said of the meeting that “[council leader] Richard Lees[e] . . . proposed the closure of the libraries, without debate on any of the points”, stating that campaigners should discuss the matter with Rosa Battle after the meeting had ended – which was once he and the majority of the team had left.

“One thing that stuck in my throat”, wrote Alali, “Was when Rosa Battle had the audacity to imply that the decision had been made (which it had) and in order to move forward, why don’t I work with the council to build the service.” When campaigners pressed the issue they were met with further attempts to diffuse tension through jokes (“I feel like I’m on Countdown”, said Battle) and a return to councils stock response, assumed as unquestionable- the need to save £80 million.