“Why are we here again?” The riots eight months on

Upon his return from holiday last August, David Cameron denounced the riots as “criminality pure and simple”. Arguably little else has emerged from his government in response. 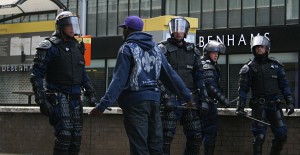 The past eight months have seen the lengthiest police and judicial crackdown in living memory, boastful threats by local councils to evict the families of rioters, and the appointment of Tony Blair’s former ASBO czar to head up a “Troubled Families Team”.

‘Reading the Riots’, a piece of major research by the Guardian and the London School of Economics into the ugly scenes of last August, was launched in response to the failure of the Coalition to hold any official inquiry into the causes of the unrest comparable with Lord Scarman’s report into the inner city riots of 1981. Recently, 150 people and a panel of councillors, police and charity chiefs crowded into Manchester’s Friends Meeting House to discuss the report, and debate whether any better way forward could be found.

The night began with a presentation by senior researcher Symeon Brown of the findings so far, based on interviews with 270 rioters across England. On the panel to lead the discussion were chief councillor for the city centre Pat Karney, Chief Superintendent Russ Jackson of Greater Manchester Police, Ruth Ibegbuna of the Manchester youth charity Reclaim, Farida Anderson of the charity Partners in Prisons, and ‘Reading the Riots’ researcher Mags Casey.

Brown relayed how anger at the police, the shooting of Mark Duggan, and the use of stop and search in particular was repeated again and again as a motivation by rioters, with police considered merely “the biggest gang”. But rather than despondency a more common emotion among perpetrators on the night seemed to be excitement and glee, with participants telling researchers of a “carnival atmosphere” and how many initially attended because they “wanted to have a look”.

Unsurprisingly most rioters were from impoverished backgrounds, with just under a third of those convicted living in Greater Manchester’s poorest 10 per cent of neighbourhoods. A “notion of protest” was present said Brown, with “people aware” that decisions affecting their lives were “made outside their communities”. In this the research corroborated Cabinet Office findings of “desperation” at “very limited” options for disadvantaged youths, and in the discussion that followed Ruth Ibegbuna would point out how protests against the Coalition’s scrapping of the Educational Maintenance Allowance, which for many young people had been “their first interaction with democracy”, had left a feeling of powerlessness when “nothing changed and nothing happened”.

“Brazen criminality” and “greed” during the often indiscriminate looting was also a factor said Brown, who noted that 75 per cent of those arrested had previous criminal convictions or cautions. Yet in contrast to a government response which has focused on organised crime only an estimated 5 per cent of arrests in Greater Manchester were of gang members and he pointed out how gang behaviour had been “atypical”, with territorial divides suspended in favour of co-operation on the night.

Later Superintendent Jackson would claim links between Manchester’s communities and the police had “never been better”, but Ibegbuna pointed out how good relations with youths at Primary school age disappeared as children grew older to become seen as “potential offenders”. She also warned of evaporating social links and claimed “every community leader should have been out” on the streets to keep the peace once it became clear the riots had spread from London. Instead, she said, “town shut down and everyone put the telly on”.

Councillor Pat Karney, who had been in the city centre when the unrest erupted, described the fear and hysteria shoppers felt as he sheltered alongside them inside Marks and Spencers while rioters outside pounded on the shop’s glass doors. Although he conceded that “we have an unequal Manchester”, for him both the people who took part in the symbolic clean up the following morning and law-abiding people in areas such as his own inner-city ward of Harpurhey were the “true face” of the city. When questioned, he stood by his past remarks that rioters were not “fit to be called Mancunians”.

Again Ibegbuna provided something of a contrast, arguing that not enough had been done to ask why some would feel angry enough to “smash up their city to get a pair of trainers”. She said those cleaning up were mostly not part of the same communities from which the rioters were drawn, saying young people there “didn’t see why they should” when their “emotional investment” in the city was “not clear”. Basic opportunities for young people who now “work for nothing in Tesco” were simply not there she said, with nothing following riots which “should have been a wake-up call”.

Official responses to the riots came in for criticism, with one audience member describing the retail-focused “I Love Manchester” campaign as “baffling”. Ibegbuna, whose charity received £4,000 from the proceeds, said while she welcomed the funds the campaign in her view “didn’t feel like it was connecting personally to young people and communities”. For his part Karney labelled the drop in retail trade following the riots “catastrophic” and defended the campaign as necessary to defend the jobs of people who rely on the city centre’s service economy.

Sadly but perhaps inescapably much the weakest point of the event was when discussion turned to what solutions can be found to prevent the riots from reoccurring. Farida Anderson of Partners of Prisoners spoke of disenfranchised communities prevented from voicing their interests and criticised “tokenistic photo ops” from above, but she was not unaware of the irony of pointing this out at a public meeting at which few young people from such communities were in attendance.

Anderson pointed to the central role of schools as one of the few “things we’ve still got left” to connect with the young, saying more needed to be done to connect with families, and Ibegbuna said the lack of opportunities had left charities such as hers to offer skills training increasingly unavailable elsewhere. But with so few jobs available, and what jobs there are largely low paid and insecure, it is difficult to escape the conclusion that charities and schools are being lent on to offer solutions they are not equipped to provide.

Oddly missing from the night was mention of one of the concrete legacies of the previous riots of 1981: the regeneration of urban Britain. Fierce but secret debate was sparked within the then Tory cabinet by the riots of ’81, with Chancellor Geoffrey Howe and Margaret Thatcher’s mentor Keith Joseph, a man infamous for fretting how “our human stock is threatened” by single mothers, pondering whether areas such as Liverpool were not better left to “managed decline”.

Others disagreed, with Thatcher’s eventual leadership challenger Michael Heseltine urging the Prime Minister to press ahead with ambitious plans to attract back private investment into the inner cities. Heseltine eventually won out, and his £100 million recasting of the derelict port of Albert Dock into a cutting edge cultural attraction and an anchor for private property investment, became a strategy at first tentatively then eagerly embraced by Britain’s declining industrial cities.

Under Labour regeneration brought often vast influxes of wealth back into the cities, but while the renewal of city centres facilitated booming property markets and burgeoning retail hubs guarded by private security, ASBOs and CCTV, the surrounding communities experiencing either unemployment or insecure, low paid work saw little improvement. Manchester remains a city with the third highest GDP in the country and over one quarter of its children growing up in severe child poverty.

The riots of 2011 were in many ways the logical end point of Heseltine’s urban model, yet from the Cabinet the reaction has merely been half-hearted attempts to “tackle” gang violence and dark warnings of moral collapse. A political solution either from above or below in redressing the crippling poverty, deprivation and inequality in the UK is desperately needed, and one hopes the discussions sparked by ‘Reading the Riots’ may eventually contribute to a better alternative than Iain Duncan Smith’s mutterings of families ruled by “chaos and dysfunctionality … and governed by a perverse set of values”.

Although less apocalyptic in their rhetoric, Labour appears little better, with senior local government politicians such as Sir Richard Leese who have staked their careers on regeneration preferring to cast the riots as “a small minority of greedy yobs”, to be dealt with through existing powers of “anti social behaviour” and nothing to interrupt business as usual. As yet there has been no original thought among any quarter of Britain’s political class to compare even with Heseltine’s, although the Secretary of State for Work and Pensions has more than a little of Keith Joseph about him.