Locals and activists will take part in a Wildlife Walk in protest against the development of former greenbelt land on this Saturday 3rd November, as part of the Stop Expansion at Manchester Airport (SEMA) campaign. 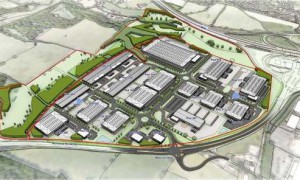 A sketch of the “logistics hub”

In August this year, Manchester Airport Group (MAG) submitted a planning application to build on the former greenbelt of Hale.

As part of an Airport City ‘masterplan’ for the area, MAG developments propose to build a ‘World Logistics Hub’, comprising of warehouse and office buildings in 51.7 hectares of a 116 hectares Airport City Enterprise Zone (EZ). In addition, they hope to include 1,473 car parking spaces, 134 bike parking spaces and a re-landscaped green zone.

Locals have expressed worry over increases in noise and light pollution, traffic congestion and Co₂ emissions that the World Logistics Hub could bring to the now re-classified area.

With the proposed project infringing on both a Site of Special Scientific Interest and a Site of Biological Importance, there are fears that irreversible damage will be done to the area’s biodiversity.

MAG have vowed a commitment to sustainability and the environment, “The neighbouring area of Wythenshawe will be directly linked through the creation of substantial new green spaces”

But local Hasty Lane residents are sceptical of this commitment. One resident spoke out, “You cannot replace 400 year old ancient woodlands by planting some new trees down the road. That’s not how biodiversity works.”

Liberal Democrat Councillor Mary Di Mauro echoed these concerns, commenting that a more appropriate Brownfield site could have been chosen for the expansion.

Residents, along with MPs, have also argued that there have been flaws in the consultation process to take the land around Sunbank Lane out of the greenbelt, which was approved in July 2012.

Hale Barn Conservatives have noted issues with the consultation and pledged support for residents, “The wider implications of the full Core Strategy…will have serious implications affecting congestion, aircraft noise and property values, and the lack of proactive consultation to date is therefore of great concern.”

MAG have proposed that the World Logistics Hub will benefit the locality in terms of employment opportunities, with 1800 new jobs anticipated over a 15 year period.

But yet again, doubts have been cast on what at first appears to be a benefit to the area. The Campaign to Protect Rural England (CPRE) Lancashire, in a report have found that rather than job opportunities, the development will largely relocate jobs from elsewhere: “This effect, known ‘abstraction’ means that jobs are not created but relocated.”

A campaigner against the expansion expressed concerns over MAG’s real incentives: “It’s well known that land around airports is a potential goldmine for development opportunities, this has nothing to do with need, redeveloping areas for the good of the people living in them, or creating jobs for the people who need them, yet again human interests and the protection of our environment are forgotten in an endless hunt for profit.”

The walk will take protestors through the green lands and forest of Sunbank. The SEMA campaign explains, “Our route will take us through the green space earmarked for destruction, with opportunities to hear from local people and see local wildlife in its threatened habitat.”

To attend the walk and support the SEMA group, meet at 2pm at Hasty Lane, near Manchester Airport, WA15 8UT. More information can be found at http://stopmanchesterairport.blogspot.co.uk/2012/10/save-sunbank-wildlife-walk-saturday-3rd.html