The success of campaigns by London Citizens and others have raised fresh interest in the idea of a living wage. As Manchester City Council bump up the minimum wage for their lowest paid workers to £7.15, with Trafford following suit, living wage activist Barney Wakefield gives his take on its strengths and weaknesses. 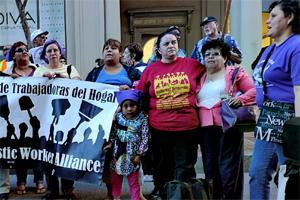 Domestic workers in the US have won a series of living wage campaigns over the past two years. Photograph © Robert B. Livingston

The stagnation of the boom and the decline of the bust the poor have experienced in and around Manchester was underlined by the latest research from local think tank the Commission for the New Economy into low pay. The idea of people receiving a living wage is difficult to argue against, yet as ever the reality is infinitely complicated.

The minimum wage and the tax credit system were introduced in the late nineties to “lift millions of children out of poverty”. UK workers, including the lowest paid, did see incomes rise until 2009. Working and family tax credit gave a real boost to incomes and the minimum wage rose above inflation. An economist might well see this as a positive effect of government policies as all the mathematical curves were going in the right direction. Unfortunately the negative effects need attention.

The minimum wage is not calculated to provide enough money for someone to live on, and as a result it is a poverty wage. All people in receipt of tax credits are on low or low middle incomes. This tax credit system therefore subsidizes employers who pay wages set at a poverty level, as direct result of how it is calculated. Huge employers, like the supermarkets, take full advantage of this, as revealed by the Fair Pay Network in their recent study.

The New Economics themselves highlight that without tax credits real income would have fallen for people on low and middle incomes in the period up to 2009. Despite government rhetoric about the virtue of free markets, the taxpayer has also propped up effective wage cuts by employers for the vast majority of the UK. 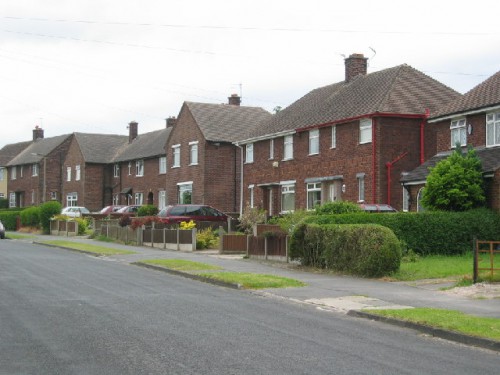 An asset and credit bubble throughout the boom encouraged the development of enormous concentrations of what economic analysts hired by the city label “low skills equilibrium” employment. The shopping centres of central Manchester and the suburbs are shining examples, employing thousands of people on low wages. These centres are enjoyed most by those with the most money, but also used by those with less money, propped up by tax credits.

Employers in these centres adopt a revolving door policy where unskilled and semi-skilled workers are often paid the statutory minimum and rarely offered any training or progression. Meanwhile living costs are pushed up by soaring housing costs, while globalisation applies downward pressure on wages and employment. After the crash hourly wages for the bottom 10 per cent of earners in Manchester fell by 7.5 per cent, wiping out any rise in living standards during the boom.

Even the £7.22 per hour suggested by New Economy is not a true living wage in Manchester, as the level it is set at is based upon the premise that those who need social housing can get it. As the economy shudders, demand for social housing has gone up and high waiting lists and the lack of new housing suitable for families on low and low middle incomes will force people to relocate or make do with harsh conditions. This instability keeps the revolving doors spinning and spitting people out of full time work into part time work while failing to provide people with a path to progression.

The problems are so serious for the bottom 10 per cent  to 20 per cent that even a very successful living wage campaign may not make a big difference to their quality of life. The New Economy recommends a focus on skill increases, and argue that a reduction of housing and public transport prices by local and central government is likely to be effective. Transport costs are a key expense, accounting on average for 5 per cent of an average household’s income, with prices for a monthly bus pass as high as £68. Social housing is not on the agenda of mainstream party politics.

The paper highlights that what some refer to as the “business case” for paying a living wage has yet to be proved and companies will likely need to make an adjustment once they stop paying poverty wages. Large employers who have already made the switch in London like KPMG and Lush, who both speak positively about their experiences, can provide guidance on this.

Living wage campaigns have not however tended to focus on small employers and their ability to pay staff a living wage is more complicated than that of huge companies. Employers dedicated to the pursuit of profit, will never voluntarily introduce a living wage policy. It will require campaigning, as evidenced by the SOAS living wage campaign or, more locally, students at the University of Manchester earlier this year. 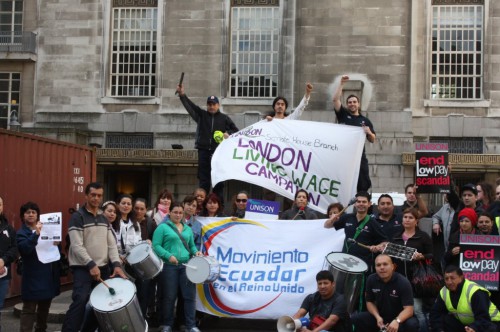 Cleaners and students jointly campaigned for a living wage at the School of Oriental and African Studies, London

It remains important to identify the unintended consequences of introducing a living wage. Higher wages attract people with more education and skills to jobs they would not have done before, preventing less skilled, less experienced people entering employment. A rise in wages being paid to staff involves the employer taking some economic hit, without any clear business benefit.

Asking employers to act morally and increase costs in these dismal times is optimistic, in both the public and private sectors. Employers may choose to switch to a living wage, reduce staff levels, reduce hours and increase pressure on existing employees, rather than increase costs. The low paid need an increase in income, regardless of the nominal level of hourly pay.

The impossible position that the poorest in Manchester and the UK are placed in is a grim one. That said, living wage campaigns have brought hope to many people and encouraged an invaluable sense of solidarity and community amongst low paid workers and their fellow citizens.

A living wage does not rely on state intervention and has the potential to make a real difference to many low paid worker’s lives. A successful campaign also chimes in with governments efforts to reduce public spending, removes reliance on tax credits and protects low paid workers from future attacks on benefits. However, without serious investment to improve the situation faced by people on low incomes, the benefits of a living wage campaign may well be lost in the cloud of economic decline.

To improve the situation of those on low incomes in Manchester, a living wage would need to be part of a wider package of education, training and significant economic restructuring. Many of the major living wage successes took place during the boom years however, and large, profitable employers who oppose paying a living wage now have a recession to strengthen their hand.