“You really don’t expect this from a charity”: Turning Point health workers strike

Striking public health workers attempting to stop an NHS contractor slashing their pay and conditions have taken their fight to Manchester. 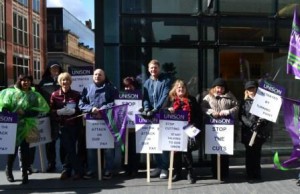 A total of 65 Unison-backed Turning Point staff from Staffordshire have taken industrial action after being told all 2,600 employees of the “social enterprise” must sign new contracts on worse terms by 17 May or face the sack.

Their action marks the latest attempt in a six month battle to make the charity – which relies on NHS contracts for the majority of its income – negotiate with Unison representatives, who represent the majority of unionised staff.

So far Turning Point executives have only chosen to recognise Unite employees and have broken “TUPE” staffing regulations by forcing the new contracts to be accepted by employees transferred when the company took control of them from the NHS a few years ago.

Workers are set to lose thousands of pounds in salary cuts and will see some protective measures such as social hours, sick and redundancy payments as well as annual leave scaled back.

It is the first time the staff, who work with people with mental health, substance abuse and employment problems, have gone on strike.

The conflict marks a landmark case that could become a regular occurrence since section 75 of the Health and Social Care Act was upheld by the House of Lords last week.

The clause states that any service currently run by the NHS which can be provided by another organisation could be put out to tender.

She said, “Regardless of what Turning Point say these changes do not benefit anybody. They are taking away all the parts that made it a worthwhile NHS contract. 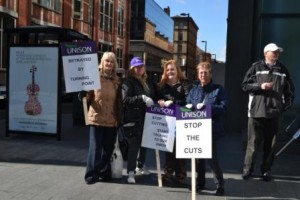 “It’s appalling; you really don’t expect this from a charity. I have never seen one that has behaved as badly as this company, especially in terms of refusing to engage with our members. What choice do they have but to go on strike?”

“We also want to make sure that if Turning Point bid for future contracts in the public sector Unison will hold them to account as they cannot be trusted”, she added.

One striking worker, who wished to remain anonymous, said that she would lose £4,000 as a result of the changes.

She said: “I have worked there for 20 years and know some colleagues who are losing up to £6,000. We are not well paid as it is-I already struggle to get by because of rising bills and I’m worried that this new contract could put me at risk of being evicted.

She explained that workers felt “bullied, bitter and angry” and felt Turning Point had no regard for the efforts the staff put in.

She added: “These changes will compromise the quality of the service; if it’s through people leaving due to these worsening conditions or otherwise. This is despite the fact that the people we look after have a complete right to a good standard of care. We didn’t mind working above and beyond for the NHS as it was a publicly funded service but now it’s being run by a business we need to uphold our rights.

A second worker stated they had been “betrayed” by the NHS for allowing the organisation to take over the service.

She said: “Other workers currently employed by the NHS need to be aware what could happen if the service they provide is contracted out to a charity or a business. The NHS never offered us a choice to remain under their control.”

Turning Point has insisted that the tough economic climate has forced senior members to implement the changes to contracts. 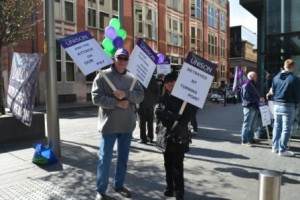 The organisation’s income grew 4.5 per cent in 2011/12 from £75.9m to £79.3m according to its latest set of accounts, although its final surplus of income in the same year after costs and reinvestments into the enterprise was just £41,000. The charity’s chief executive Lord Victor Adebowale however was paid £165,000 in 2012, with a further £473,000 split between three other senior executives.

A spokeswoman said: “Since November 2012 we have been in consultation with our staff and our recognised union, Unite about the proposed changes to staff contracts. The economic environment and ever changing demands on public finances we are working in means that Turning Point needs to proceed with these changes now.

“As an organisation we will remain committed to maintaining the base pay for our employees; valuing the role they play and protecting as many jobs as possible. We have also made a commitment to raise the base pay of some of our front line staff.”

Responding to Turning Point’s claim Jenny Murray said: “We don’t believe their argument that they have a strong business case to do this as the company’s financial record proves otherwise.

“Unless Turning Point talks to us this will be part of a continuing campaign. I can see this strike spreading around other areas of the country.”