Bahraini citizens who participated in a solidarity protest in Manchester against their government’s repression of pro-democracy demonstrations have alleged that they are being targeted for reprisals. 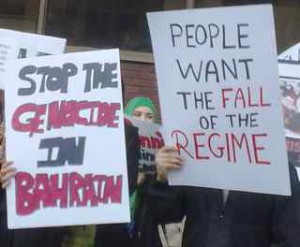 They claim that Bahraini government informants infiltrated the demonstration outside BBC Manchester two weeks ago, which involved hundreds of Bahraini citizens and supporters, and took video recordings of the participants. According to Bahraini students at Manchester Metropolitan University, eight Bahrainis at higher education institutions in Manchester have subsequently had their scholarships cancelled, and are fearful of being arrested upon their return home.

Speaking to MULE, another of the Bahraini students named Mohammed stated that their protests were “for freedom and justice and to change the regime and government of Bahrain”, which is currently controlled by the Al Khalifa royal family. He described himself and the other students as “very scared” at the prospect of arrest by the Bahraini authorities, who have been accused of multiple serious human rights violations in their response to protests in February and March this year which left five people dead.

Another Bahraini citizen living in Bolton, Yasser Al Sayer, claims that following his attendance of the protest his nephew living in Bahrain was beaten and has now disappeared.

Speaking to Stop the War Coalition activists, Al Sayer said: “Three days after the Manchester protest I got a call from my sister. She told me that seven jeeps and two civilian cars pulled up outside her house. Armed Bahraini and Saudi forces raided her home. My nephew Sayed was beaten very badly. They told my sister they were taking her son, but that she could go to the police station in Isa Town to collect him. When she arrived in the morning they said they had no record of him.”

In recent years Britain has been a major supporter of the Bahraini security services, providing training, weaponry and advice. Repressive regimes in the Middle East are widely believed to actively monitor dissidents based overseas. Britain’s Foreign Secretary William Hague recently said that the British government ‘will stand by those protesting for democracy in Bahrain.’