Bahraini students whose scholarships were removed following their participation in protests in Manchester are facing destitution and major disruption to their studies. The students and their supporters have called on universities, higher education institutions and the public in Greater Manchester to offer greater support to those affected by the political turmoil in Bahrain. 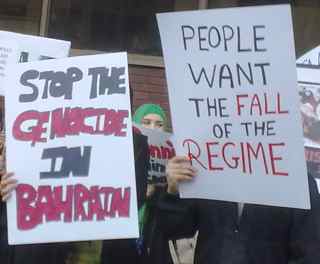 There are currently approximately 300 Bahraini students in the UK, with around 50 attending educational institutions in Greater Manchester. After suspected Bahraini government spies filmed and photographed a solidarity demonstration held outside the BBC building on Oxford Road last month, several students had their scholarships removed, alongside threats to their family from government security forces. With their money now running out, several have been forced to leave their rented accommodation to lodge with friends. They face an uncertain future, fearing arrest upon their return, but unable to afford fees and the cost of living in the UK.

Most of the students are concerned about potential further reprisals and are wary of speaking to the press. One, wishing only to be identified as Ahmed, spoke to MULE about his situation.

Three days after the protest, which Ahmed stresses was “in solidarity with the Bahraini people” rather than against the present regime, his mother received a phone call from the Ministry of Education informing her that Ahmed’s scholarship funds had been removed.

Ahmed now doesn’t have enough money to pay rent and has moved from his flat to sleep on a friend’s couch. He says many other Bahraini students in Manchester are in the same situation. He is worried that if he goes back to Bahrain he will be detained – other Bahraini students returning from India and Saudi Arabia he says, were picked up by security forces at the airport.

“It is enough for me to stay here,” he says. The higher education institution in Manchester, which he wishes to remain nameless to avoid his identification, has so far refused to help. “I don’t see any help … the British government have done nothing, though protesting in this country is legal,” he continues.

Manchester Metropolitan University have announced that they are willing to waive their Bahraini students’ fees for halls accommodation for the next month, and will be offering a range of other supports on an individual basis.

Fountain also urged any Bahraini students affected who have not so far come forward, to contact the University’s advice services, stressing that the matter will be handled confidentially.

The University of Manchester told MULW that it had three known students whose scholarships had been withdrawn as a result of participation in peaceful protests, and that the university had offered them hardship loans to enable them to reach the end of the academic year.

A statement from the University of Salford sent to MULE said, “The University of Salford has communicated with all students, reassuring them that support is available internally for those who are concerned about political or environmental sensitivities in their home countries. We are providing practical and emotional support to individuals on a case by case basis, including providing emergency funding to cover immediate living costs.”

On Wednesday 20 April last, an open letter produced by National Union of Students Executive member Mark Bergfeld and activists at the University of Manchester Students Union called upon the UK government to provide financial support and protection to Bahraini students in the UK. The letter states, “Universal access to education is a right and should not be denied as a punishment for participating in protest,” and points out that the government has already agreed to provide similar support for Libyan students in the UK at risk of punishment from the Gaddafi regime.