Comment: A total innocent has been sentenced to death while the criminal flees the courtroom

What a difference a year makes. Back in 2009, finance was public enemy number one. The lunatic expansion and under-regulation of dodgy financial services had precipitated an economic crash that destroyed tax revenues and stretched dole queues. The bailouts transferred tens of billions of public money into the black holes of bank balance sheets. If the government’s budget was subsequently in a mess, we all knew who was to blame. 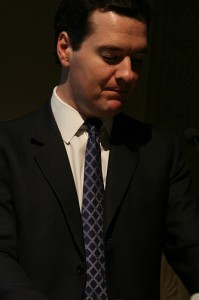 Fast forward to today, and the deficit has been branded the problem of our public sector, and our public sector alone. The men who sit in judgement (and they are almost all men) tell us that it is bloated rather than stretched and that its workers’ paypackets are ‘taking money out of the economy’ rather than providing the most stable source of consumers. Our welfare state, already one of the  harshest in Europe, is too lavish;  claiming benefits is a choice of lifestyle rather than one of desperation, while contributions towards housing are keeping a ceaselessly reproducing super-elite of scroungers in palatial homes.

The noose of the most extensive spending cuts imposed on peacetime Britain is proclaimed as the only remedy. The banks are nowhere to be seen amid this bloodletting; more money is set to be raised from cuts to child benefit than through new levies on the financial sector. A complete innocent has been sentenced to death while the criminal flees the courtroom, whereas David Cameron and George Osborne – the chirpy executioner double act both worth tens of millions of pounds – divert the crowd by telling them that we are ‘all in this together.’

To prove it they picked Sir Phillip Green, £300 million of whom’s contribution to the public purse is currently hidden in the tax haven of Monaco, to choose where to push the knife during  the coalition’s autopsy of the public sector. This level of dedication to public finances is matched by the owners of the right wing press. The Barclay brothers, proprietors of the Daily Telegraph, avoid tax by sealing themselves in a castle on the island of Brecqhou. Daily Mail owner Jonathon Harmsworth cares enough about his country to  be known as 4th Viscount Rothermere, but not enough that he won’t give up the non-domiciled status that means he can pay tax in France but not the UK. It is their newspapers who lead the mob chanting about benefit scroungers and the overpaid public sector.

The comparison between the £5bn bill for fraud and error in benefit claims and the £7bn lost to corporate tax avoidance shines a light on their collective hypocrisy. That Osborne can use the crimes of a few to slam all those on benefits as making a lifestyle choice while refusing to address the impact of rampant tax avoidance or extract from the financial sector their due shines a damning light on his. His actions speak as clearly as the acrid hostility of his speeches. Relying on the welfare state to relieve poverty is a criminal lifestyle choice born of greed. To retreat to distant chateux, castles and mansions in order to hoard millions is a lifestyle reserved for the untouchably privileged.

This is to say nothing of the senselessness of his plans. According to even the International Monetary Fund, major cuts during a recession will slow rather than increase growth. Nor can the private sector simply soak up public sector redundancies, since the two sectors are implicitly, inseperably linked. Price Waterhouse Coopers has estimated that up to half a million jobs in the private sector could go as a result of the public sector cuts and the multiplier effect they create in the economy.

Nor are the public finances remotely similar to  a household budget. Households can’t print their own currency and inflate their debts away. Nor is the government’s debt a threat whatsoever, since it is mostly just passing money round different sectors of the national economy; Osborne’s claim that the UK government was paying 120m interest to foreign governments per day was therefore nonsensical. In fact only 20 per cent of the debt is held overseas, and not all of this with foreign governments. 80 per cent of the government’s debt is British people lending to British people. Interest paid on government debt feeds Britain’s pension funds, British banks (which are mostly owned by the government), British corporations, and the Bank of England. If the household analogy were true, it’s more like owing  several thousand pounds to your well-off grandma  to pay for a university course that will ensure a good future wage: a big debt for sure, but one that is neither unproductive nor cripling.

Perhaps most importantly though, what the cuts mania ignores is that along with every debt, every liability, is an asset: those debts funds schools, hospitals and infrastructure that have real social benefits, and ultimately generate more than enough wealth to pay off the investment. These assets are about to be destroyed on an unprecedented scale. But more than assets, these are people. Despite what the Tory press may say, public sector workers are not overpaid managers twiddling their thumbs through ‘non-jobs’.  They are not the Howard Bernsteins of this world. They do hard work looking after the neglected and vulnerable, our children and the elderly. They are social workers, teachers, nurses. They rely on an army of ambulance drivers, cooks, and cleaners. They have been attacked relentlessly for decades by the axis of the Sun, the Mail and the Telegraph, who have now been reinforced by a Tory government propped up by a Quisling rump of Lib Dems.

The deficit is a smokescreen layed on the ground to conceal in dark mist the ideological, political attack of a government just as unprincipled and in thrall to business as New Labour. Those of us who hoped coalition would hamstring the worst inclinations of the Tories have had our niavety paid back with interest. As hundreds of thousands of public sector workers are forced to accept the ‘lifestyle choice’ of benefits, let’s not forget about the lifestyle of the men and women spending half the year in castles on isolated islands or overlooking the beaches of the Mediteranean. They have turned their back on society and sharpened the blades of capitalism simply to satiate their glutonous longing for wealth. The goverment has made clear that it represents them, and no-one else.