Two weeks ago Sir Howard Bernstein – in effect the city’s top civil servant – responded to Communities Minister Eric Pickle’s call that council bosses earning more than £200,000 should take a 10% cut by saying: “I don’t think this is an issue for discussion with central government. My salary, as chief executive for Manchester, is decided by Manchester city council and the elected leaders.” 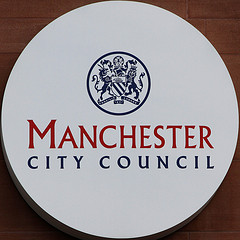 His comments came just a week after the announcement that Greater Manchester Councils would work together to achieve 25% savings. This show of obstinacy came as a slap in the face to many on modest incomes who are seeing their pensions slashed, pay freezes imposed and jobs lost.

The current pay package Sir Howard receives places him in the top 1% of earners in the UK according to 2009 figures from the Office for National Statistics.  With Association of Greater Manchester Authorities (AGMA) Councils preparing for a budget cut of a quarter, is it unreasonable to expect those at the top to lead by example?

Last year Sir Howard took home a total pay of £230,000. Part of his remuneration this year included a £19,250 bonus as returning officer for the May elections – despite the chaotic scenes in the Withington constituency when hundreds of voters were disenfranchised due to IT system failure and inadequate staffing. Eventually he donated £4,000 of this sum to charity but was still strongly criticised by MP John Leech.  Sir Howard’s audacity becomes all the more acute when looking at the pay increases he has been awarded in recent years. Figures obtained under a Freedom of Information (FoI)  request revealed that between the financial years 2005/06 to 2007/08 his salary rose by 17% from £170,664 to £199,056 – this at a time when inflation never topped 3%.

MULE asked Sir Howard to clarify his comments and asked if he would be taking a pay cut in solidarity with low-paid council workers and as a way of helping meet the anticipated 25% cuts. The response? A carbon copy of what he was already quoted as saying. So why now such reticence to speak aloud? Normally civil servants are insulated from the media as they are supposed to be politically neutral. And so there is a whiff of hypocrisy as Sir Howard intervenes at his pleasure and then refuses to justify that which he has publicly defended. 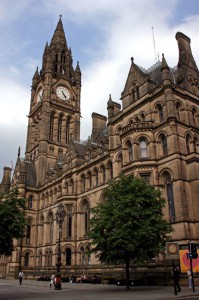 While cases such as this are rare, they  are often used to give a misleading impression of the entire public sector as overpaid in comparison with the private sector. Yet an examination of statistics relating to pay and pensions for the average public sector worker quickly dispels this notion.

Nearly a fifth of people working in the public sector earn less than £7 per hour – a figure commonly described as a ‘living wage’ threshold by many anti-poverty and fair pay campaigners; and of these almost all are women . In total public sector employees account for around quarter of all workers earning beneath this threshold. Moreover a study by the Institute for Fiscal Studies declared that “pay levels in the public sector are probably not significantly out of line with those of similar workers in the private sector”; rather the key difference identified was that they receive more generous pensions.

Despite this, the Hutton Report published this month put rest to the myth that all public sector workers enjoy gold-plated pensions: the average annual amount is just £7,800, while around half receive less than £5,600.

Nevertheless the lowest paid council workers in Manchester fare slightly better than many of their counterparts in the private sector. In 2008 the Council took the bold and laudable step of introducing a Manchester Minimum Wage above the national level for all of its employees. At the time it claimed that this would benefit 850 workers although the Council press department now puts this at a lower number of 110 out of an approximate 11,500 total employees.

The rate currently stands at £ 6.84 per hour, just 91p above the national minimum wage – meaning that a full-time worker on this band will earn £12,740 in a year– still however less than half the median national salary of £25,800 and below the £7 per hour living wage rate. Their generosity to the lowest earning should not therefore go overestimated. 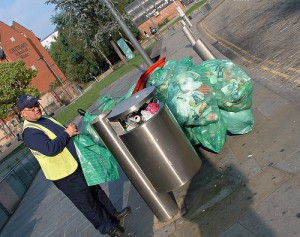 No attack on the bottom

Discontent at the size of Sir Howard’s pay packet has been aired before. In January 2010 a motion signed by 12 members of Manchester City Council noted that  “…some Executive remuneration has now reached excessive levels and action is needed to limit excessive pay awards and bonuses are not based on merit”. It went on to recommend the establishment of a UK High Pay Commission in accordance with the Council’s aims of “improving the health, education, security and quality of life of Manchester residents”. Clearly, this was no shot in the dark.

The likes of Sir Howard Bernstein are a rare breed but dominate headlines, often giving a distorted perception of the public sector. The bloated pay of a few high-ranking public officials should not be used as a cover to reproduce the myth that all public sector workers are greedy and overpaid. But when it comes to the crunch and the Council start to make cuts those elected to represent residents should take a firm stand and slash the unjustifiable and astronomical salaries of those at the top of the tree before attacking its roots.