It may seem like a long time ago now, but the Copenhagen climate talks held in December last year continue to cast a shadow over the future of the planet. Monumental in their failure to achieve anything resembling the kind of agreements needed to tackle climate change, the talks showed how the current global political system is incapable of putting people before economy. The summit also brought together a variety of social movements from across the globe. But what was it like to be there on the ground?

This week MULE presents a series of exclusive articles from people who were there. Today Manchester’s Robbie Gillett of Manchester Climate Action gives his diary of events and thoughts. 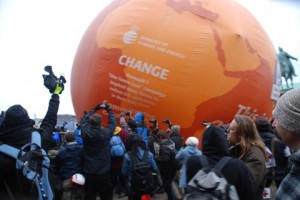 The UN Climate talks in Copenhagen last December had been the focal point for much of the environmental movement for the last few years. The talks may have been a flop as many expected them to be, but for those outside on the streets, the COP15 process brought together networks from around the world and affirmed the need for social movements to take the lead on climate change.

9am – Travelling with the Climate Camp network, we arrive by coach and head straight to the large NGO march from Copenhagen central to the Bella Centre where the talks would be held. There are about 100,000 people there including a large “System Change, Not Climate Change” bloc.  The Danish police try out their new draconian protest legislation and mass arrest 700 people, towards the back of the march. Nearly 1,000 people were arrested that day in total, yet only four were charged. The demo finishes with the usual array of well meaning speeches. It did provide a good opportunity to see the area around the Bella Centre, ready for the Reclaim Power day on the Wednesday.

Climate Justice Action have arranged sleeping accomodation in a school in the north of the city. It’s clean, warm and dry. Small teams of people go out each evening and bring back mountains of skipped food that local supermarkets have thrown out, which provides cheap breakfasts and late night snacks throughout the week.

Got into town too late for the Via Campesina demo, which was highlighting issues around  industrialised agriculture and indigenous land rights. After that we head to the KlimaForum to check out some workshops. Later in the week, the Klima Forum would issue an impressive ‘People’s Declaration’ outlining a vision for just and effective solutions to climate change – available here and thoroughly recommended reading.

Today is the No Borders day. This is organised by political groups opposed to border and migration control. People are slightly nervous after Saturday’s mass arrests.  If the police would mass arrest 1,000 people on an NGO demo, typically seen as the more moderate side of protest – how are they going to react to more radical sections of the mobilisation?

Nevertheless we were determined to show we wouldn’t be intimidated. Our concerns subside however, as we realise the police are backing off. People speculate that Saturday’s mass arrests may have caused a bit of embarrassment for the Danish government in the international press, so the 2,000-strong No Borders demo proceeded to the Ministry of Defence unhindered, which was surrounded bumper-to-bumper by police vans.  The soundsystem truck turns off the dubstep and someone makes a poignant speech highlighting that migrants are already being caught between inhospitable environments and economies on one side, and racist and violent border controls on the other. 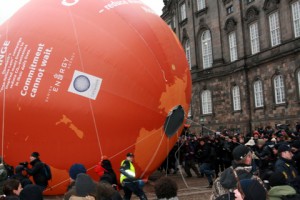 The fight to save the world

Meanwhile, the crowd dismantle a large orange globe promoting the COP15 process outside the Danish parliament.

An interesting scene breaks out with protesters trying to pull the globe in one direction and the state security forces pulling it another – a vivid visual metaphor of the forces at play in the struggle for the stakes of the planet. Eventually the protesters win, and the huge inflatable globe is dragged back and forth around the square like something out of a Carry-On film.

After a planning meeting at one of the convergence centres at Ragnhildsgade, we head down to Christiania for a Reclaim Power party. Christiania is Europe’s longest running squatted community and free town. It has been in a constant battle against the Danish government who have in different eras tried to close it, tolerated it as social experiment, and more recently tried to enforce private property rights instead of cooperative ownership – against the wishes of the community who live there. 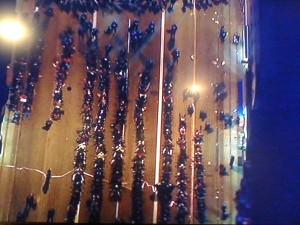 We arrive at 10pm to find the whole area locked down by police. Calls from inside say the police have fired rounds of tear gas into the area and are running around inside like storm troopers.  We watched as the police seem to get out all their toys,  including dogs, helicopters, a water cannon (which fortunately wasn’t used), arrest coaches and lots and lots of vans. 194 people are arrested.

“What the fuck?” is the question on a lot of people’s lips.  Police later claimed that they were attacked when putting out burning barricades.  Many of us felt that the police were flexing their muscles in preparation for Wednesday, and putting the boot in after most of the press has gone to print, just hours after the show of restraint on the No Borders demo.

Most people are busy prepping for the big demo on Wednesday. The Candy Factory, where the Bike Bloc have been preparing is searched and a couple of the large ‘Double Double Trouble’ contraptions are seized. Final arrangements are worked out a mass meeting at Ragnhildsgade and into the night. There’s a lot of energy and people are excited. 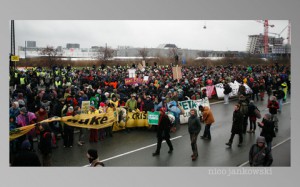 The Blue Bloc proceed towards the Bella Centre

We’re up early because the meeting point of the demo has been called for 8am. Plus we expect to get hassled all along the way across the city. Sure enough, a number of police are searching people on their way out of our accommodation at the school.

The Reclaim Power demo had four main contingents which intended to hold a ‘People’s Summit’ inside the UN area of the Bella Centre, or just outside depending on how far we could get.

The Delegation Walk Out

One of the most powerful movements of the whole week was when a number of delegates from the global south, including Bolivia, Haiti, the Maldives, Bangladesh, and other countries organised a mass walk out of the Bella Centre and attempted to meet the protesters and join the People’s Summit on the street. The walk-out was blamed on the sidelining of the earlier Kyoto agreement when a leaked text edited by the Danish government revealed that the richer countries intended to usher aside the UN role in climate agreements and force conditions upon poorer nations. Yet they too were forcibly beaten back by riot cops. For me, this was one of the most powerful moments that delegitimised the whole COP15 process. See here for a video.

Attended a debrief meeting in the evening at Ragnhildsgade. Climate Justice Action discussed the future of the network, given that its main focus had been on Copenhagen. The Danes proposed that we press release a statement condemning the police repression. It was agreed, but some people felt uneasy that the story of COP15 was becoming too dominated by the police. But as one Copenhagen activist put it: “This is important to me, because COP15 has been used as an excuse to turn the country I live in into a police state.”

A demo against police repression was organised in the afternoon, and most people got on the Climate Camp buses back to the UK.

And then, from inside the Bella Centre we waited for their outcome. Obama had come to save the day apparently – or not at all as it would transpire. Copenhagen was always expected to be a failure in terms of a getting a fair and just treaty. But what was produced, with its lack of targets and any meaningful substance was a failure for the political elites too.

For those outside, COP15 marked a new level of global unity – where people from around the world joined together to fight for system change, not climate change. Instead of looking at new markets, new technologies and a new form of capitalism to solve the problem, we were looking to a more fundamental shift in who runs our economies and for what purpose. This coming together should hopefully mark a new era in the struggle for climate justice, as people return to continue organising in their local communities. What the failure of the ‘Copenhagen Accord’ shows is that we need to continue building our own solutions from the bottom up instead of relying on incompetent and corrupt political elites and their corporate sponsors.

And so the slogan was heard around the streets: “Our climate – not your business”.

The Camp for Climate Action in the UK is now taking a long look at its strategies for the months and years ahead. There is a Northern Regional Gathering on Sunday 24 January 2010 at Bridge 5 Mill, MERCI, where all are welcome to reflect on what’s happened and discuss the where next for the climate justice movement.