In our final dispatch from the protests that took place on streets of Copenhagen last December, John Sandiford gives his account of the tactics employed by the Danish Politi (police force).

With the concerted use of smear tactics by the Danish authorities against the opposition movement in the build-up to the UN Climate Conference in Copenhagen, it was no surprise then that a systematic crushing of protest was to follow. Yet beyond those present at the protests and involved in the broader movement, few realise that at the heart of the operation lay much inexperience and a lack of preparation.

At times the Danish police were clearly underprepared, particularly when marshalling mobile protests. During both the ‘Halt the Production’ and the ‘No Borders’ marches I witnessed police attempting to  form a ‘kettle’ – a tactic used to seal off, contain and prevent a march from progressing by holding it in one enclosed geographical area. Rather than forming a sturdy human wall, unwilling to budge, the Danish police could be seen shuffling, breaking ranks, back pedalling and at one point jogging backwards, falling over themselves and their colleagues. In addition I saw the very unfamiliar sight of police officers isolated from their pack, surrounded by rings of peaceful, dancing protesters, holding hands singing “This is what democracy looks like”. Irrespective of the fact the protesters posed no threat, experience tells me that if this was in the UK the reaction would probably have been far more swift and brutal.

On separate occasions police could be heard, some in hushed tones, some more openly proclaiming “we are against climate change too, it is our orders…hey maybe I should join you guys after my shift…I am only doing my job, I support you and your cause” and so on.  Even more surprisingly some police officers were apologetic. As Richard George, a protester from the UK quoted in the Times suggested, “The officer said, ‘I’m afraid we’re going to have to arrest you. You’re not criminals, we’re not going to treat you like criminals, but we’re going to arrest you’… He was very apologetic.”

Danish citizens I spoke to throughout my time in Copenhagen confirmed the above. One woman made it clear to me that she wasn’t excusing what at times could be regarded as police overreaction, but highlighted it should be remembered when evaluating it what led to repeated and unlawful breaches of fundamental human rights that “many of them are not used to this. They have been brought from the provinces and are used to dealing with drunks, small gangs…they are working long shifts, they know the world is watching and they are scared”.

To what extent the police were inexperienced or underprepared is becomes somewhat irrelevant in light of the fact that the Danish government armed their law enforcers with an arsenal of unchecked powers to disrupt and intimidate protesters. 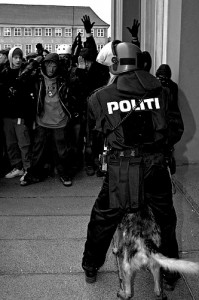 The shiniest new toy for the police to play with was the bizarre notion of preventative arrest. Introduced into Danish law specifically for the conference it amounted to detention for up to 12 hours without charge, based neither on suspicion nor evidence, but on the whim of the police force. It was used aggressively throughout the week with up to 2,000 arrests being made. Hundreds of protesters were left sitting in roads throughout the city centre in sub-zero temperatures for up to four hours, denied food, water and medical assistance with hands cuffed. When requests were made for the toilet officers were often heard to sneer, “You are not taking your trousers down here, you will just have to piss your pants”. Those detained were then bussed off to a temporary prison, in a freezing cold warehouse filled with wire cages, referred to as ‘Guantanamo Junior’ by the guards. They were left handcuffed in cages for up to 12 hours and again denied food and water for long periods of time. Upon their release those detained recounted how police officers patrolled outside the cages with dogs, taunting and brandishing pepper spray canisters. Charges, however, were not brought. This was the blatant use of state monopoly on legitimate violence, flexed to subjugate those intent on criticising the conference.

If this was not enough there was extensive use of wire taps and undercover officers. Arbitrary and invasive abuse of stop and search powers witnessed in town squares, street corners, on public transport also occurred. Prominent activists were arrested. Journalists and press were also treated roughly – a direct attack on a democratic right of speech and tool of scrutiny. Delegates visiting in an official capacity intimidated. Protesters’ accommodation, as well as vehicles raided at all times of the day, but particularly early morning or the middle of the night to maximise disruption. Pepper spray and tear gas use also became a regular feature of daily life. Shockingly it was even used on those handcuffed, inside the wire cages, denied water or medical assistance to counter effects of toxic gases. One protester quoted in the Guardian said that by the time he left the detention facility there were clouds of tear gas lingering, which had even started to affect the police on duty.

The Danish government had given an insecure and inexperienced police force carte blanche to bully and harass. The introduction of such a sinister legal framework demonstrated a clear intention to emasculate the protests and deter others – yet it was perversely sanctioned in the name of democracy and law and order. Freedom of assembly and the right to peaceful protest had been suspended in Copenhagen to the disgust of many: “It’s absolutely outrageous that the police responded in this extreme manner…. It’s a complete violation of the right to protest and a step towards the breakdown of democracy…people must be heard, not criminalised,” said Deborah Doane, Director of the World Development Movement. 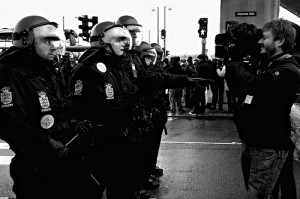 Even the press got it rough from the Politi

Brian Mikkelsen, the Danish Justice Minister, offered an alternative view, as quoted in the Politiken newspaper: “The aim of the law was to prevent violent demonstrators from setting the town on fire, attacking the police and ordinary citizens and from making extensive vandalism. And the law has worked. The police have…thanks to their new powers done a really good job and prevented extensive unrest. I can tell the people appreciate this.”

Surely locking people in cages for 12 hours and then releasing them would be more like a red rag to a bull for the violent demonstrator, more likely to incite than to deter. Given that out of the 2,000 arrested only 14 people have been charged provides further evidence that the law was not applied appropriately or in line with European Human Rights law. As Claus Bonnez, a human rights lawyer underlined in the Guardian: “This has all been done under the fairly new law which entitles police to arrest people and  keep them for up to 12 hours. But according to the European Court of Human Rights, the police will have to prove that it is necessary for democratic society to make such arrests. And I don’t think the Danish police will be able to prove that.”

The Minister’s view of the Danish people’s evaluation was also far off the mark. The Danish citizens I spoke to were apologetic, criticising their government, and expressing shame and anger at the excessive conduct of the security forces. Teachers and school children hung out of class room windows waving peace signs, draping banners and shouting “We support you!” Perhaps the ultimate counter example to the Danish government line came from a courageous old lady. So dismayed by the police treatment of protesters she courageously ushered protesters from Manchester into her city centre apartment, offering them shelter and food for four hours until the police had dispersed.

The G20 conference led to significant changes in policing of protests, as well as to public perception of protesters. Increased exposure of incidents courtesy of user-generated internet websites has had a powerful effect in the media landscape; and the employment of social networking websites such as Twitter allow new ways of mobilising and organising in response to events on the ground. These provide activists with creative tools for organising and finding new routes of combating the actions of security forces. And so in light of the wide-ranging ‘exceptional’ powers being afforded to police by parliaments and the curtailment of civil liberties – in the specific political goal of extinguishing dissent – their employment and development will take a critical role.

The experience in Copenhagen reveals to us a different reaction from the political elite as to what we might have expected: unlike what frequently happens in the UK, the Danish government openly accepted and sought credit for the policing. Policy and what went on at an operational level was directly linked. In contrast the UK government often clings to the distinction between policy and operation. This allows them to avoid shouldering responsibility for misdemeanours perpetrated by police, hanging out to dry individuals scapegoated and portrayed as renegades, as illustrated by the cases of Jean Charles de Menezes and Ian Tomlinson – innocent men, both murdered by security forces who were then paraded at enquiries to refute the notion of governmental blame.

Yet despite the back-slapping of the Danish government at its perceived success in the reaction from much of the Danish public nevertheless provided cause for optimism. Rest assured that if the Danish citizens were sincere in their reproach of their government – and I believe they were – Mr Mikkelsen and his cohorts will not get off as lightly as they think.

Over the last two weeks, MULE has published an exclusive glimpse into the Copenhagen Diary of Manchester Climate Action´s Robbie Gillett, heard what it was like to be on the front lines as a medic from Sarah McCulloch and Tom Jeffrey looked at the practical side of radical politics in the city.

Images taken from ‘1000 words and images’ photo blog on a Creative Commons license.