Let them work: campaigners call for the right to work for asylum seekers

Denied the right to work since 2002, destitution has soared among asylum seekers who seek sanctuary in the UK. Lawrence Carter speaks to one forced migrant about his experiences and takes a look at a campaign fighting to make a change.

Campaigners hold a sleepout in protest against destitution. Photo: Student Action for Refugees

Back in Zimbabwe Mike Mpofu worked for the National Railways as a mechanical engineer, machining spare parts. He says that he loved his job because “it was about creating things that were responsible for pulling thousands of tons of goods. I loved the feeling of shaping metal with my hands and using machines. I was proud of my work.”

When he was forced to flee his country Mpofu had no idea about benefits or work restrictions in the UK and just wanted to be free. “My life was good in Zimbabwe but I was no longer safe there and came to Britain hoping to be safe and rebuild my life.”

It took over nine years for the Government to recognise that Mpofu needed protection and in that time he was refused permission to work. Like many asylum seekers, he was in a position in which the Government wouldn’t believe his story but agreed that it was too dangerous to send him home. This meant that he was in limbo, surviving on £5 per day and sometimes left destitute. 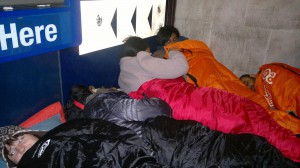 “It’s very hard to put into words what it’s like to be denied the right to support yourself. It was more like prison than the freedom I had hoped for, as I watched my work experience and skills go down the drain. I lost so much confidence I feel like it will take me years to get back to where I was.”

Prior to 2002 asylum seekers were permitted to work if they had been waiting for over six months for a decision on their case, enabling people to contribute to society rather than rely on benefits. However the Immigration Minister at the time, Beverley Hughes, withdrew this entitlement, arguing that asylum applicants were drawn to the UK by the policy. This was a reaction to intense public debate about the asylum system due to record numbers of asylum applications in 2002, which peaked at 84,130.

Research conducted for both the Home Office and the Refugee Council, however, found no evidence to support a link between domestic asylum policy and numbers of applications. The latter research found that over two thirds of asylum applicants have no say in where they go, instead paying an ‘agent’ to smuggle them to safety. Rather than there being a ‘pull factor’ in which people are drawn to the UK, the evidence suggests that people are pushed into leaving and take the most pragmatic route to safety.

Indeed, many asylum applicants leave behind lives of wealth and status in search of safety. The idea that a doctor would leave her family, friends and six bedroom house in Zimbabwe in order to live on £5 a day is unlikely to many. Yet shortly after the new policy came into effect the British Medical Association found that there were 872 doctors unable to work, despite a national shortage.

There are many people from countries that the Home Office consider too dangerous to return people to, such as Zimbabwe, who are simply stuck in limbo. For Mpofu the situation is simple, “why not let these people contribute their skills and tax revenues to the UK whilst they wait for their country to become safe or for the Home Office to recognise that they need protection?”

Together with the TUC and Refugee Council, Manchester Refugee Support Network is calling on the Government to allow the right to work for asylum seekers who have either been waiting for over six months for a decision on their case or cannot return home for reasons outside their control. 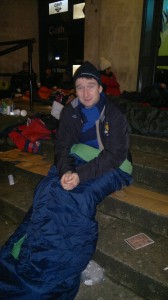 Some argue it is not right to allow non-British citizens to work when there is such high unemployment. Yet the proposed change in policy only applies to jobs on the Government’s occupation shortage list, meaning that asylum seekers would not be in competition with British people for jobs. As the economy grows, so will the number of jobs that require skills that are in short supply. A change in policy would thus enable asylum seekers, many of whom have fled unimaginable horrors, to aid the economic recovery whilst rebuilding their lives.

Since the general election eight MPs in Greater Manchester have been persuaded to support the campaign and on February 24 Manchester Refugee Support Network and a host of other organisations, including Amnesty International, Student Action for Refugees and The Boaz Trust, held a sleepout in protest against the destitution of asylum seekers – a condition intimately linked being denied the right to provide for themselves. Over two-hundred people attended, with 52 people sleeping rough for the night, including the MPs Kate Green and John Leech. This solidarity was repeated all over the country in a national week of action, revealing the strength of support for asylum seekers in the UK.

Mpofu described how, having been denied permission to work for nine years, it makes him sad to think of all that he could have contributed. “I have tried to remain employable through volunteering and going to college, but employers want paid experience.” Despite this he feels lucky to have received help and support from so many people. Others are not so fortunate. “Through my volunteer role counselling people, I have seen how policies such as this devastate the lives of already vulnerable people. I would call on people to contact their MP to ask them to support this vital campaign.”