With communities reeling from cuts, poverty among the most vulnerable in society remains as high and relevant as ever. Bernadette Hyland speaks to one group in Oldham seeking to bring communities together and end the enforced destitution of asylum seekers. 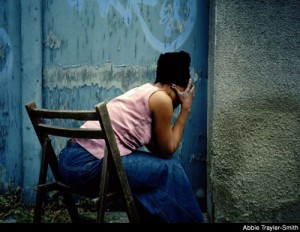 “Feed a family of four for £50 per week”, a leading supermarket offers to its consumers. The Destitution Project in Oldham feeds 70 people per week for an average of £7 each.

The irony of the project using the same supermarket to buy the contents of their food parcels is not lost on founder member Mike Luft: “Destitution is an uncomfortable concept for people in this society, no-one wants to believe it happens.  Those it happens to live a parallel life to the checkout assistant who sells us the contents of our weekly food parcel.”

The organisation grew out of community action in Oldham following the aftermath of the riots in May 2001 and is now the largest destitution project in Greater Manchester. “It was when we started a monthly friendship social to bring together all people in this area that we noticed that there was a group of people who were asylum seekers and who needed support on different levels”, Mike explains.

Based in Oldham Baptist Church, fifteen retired people run the group and raise money for food parcels. They also provide practical help with legal advice, referrals to the hospital for medical needs and, at a very basic level, create a friendly and safe atmosphere where people can relax and mix together.

In 2001 the numbers of asylum seekers attending the social numbered no more than half a dozen. Most clients were Pakistani, including a group of single women escaping abuse from their partners or family. Ten years later the profile of the users has radically changed, reflecting the ever-changing political conflicts of the world, and includes people from Iran, Iraq, Palestine, Côte d’Ivoire and Cameroon.  Around 70 people now regularly attend, mainly single men aged between their late teens to early 30s, though some are families with children.

Asylum seekers do not have the right to work in the UK and destitution arises once an applicant has lost their final appeal, with all financial support is cut off after 21 days. Yet the system of seeking the right to stay in this country is becoming more difficult, with Oxfam reporting more people including families losing access to effective legal advice due to changes to legal aid effectively paying immigration lawyers a flat rate, regardless of the complexities or length of the case.

This fixed fee system, the Refugee Council explained in its parliamentary briefing last February, has set rates “at such a level that many experienced practitioners formed the view that it was no longer practical to adequately advise asylum seekers in the time allowed”, causing many legal aid providers to “simply withdraw from this area of work”.

It is at this point that the project can step in and provide help with finding a solicitor, assist with completion of forms and advocate for them if their English is poor. However, even when all legal avenues are exhausted it is often difficult for the government to return people to their home countries due to wars, lack of travel documents and sometimes the fact that the country does not have a functioning airport.

The project has to raise £1500 every month to provide a basic food parcel and bus fare for each person.   The Red Cross are involved with the project and provide some money, the rest is raised through church and faith based organisations including the Quakers as well as individuals providing regular monthly payments. There is little help from organisations such as trade unions, which often have policies condemning the asylum system but provide no practical funding or support.

Luft feels the way asylum seekers are treated is an affront to a civilised society and it comes as no surprise that this project was born and thrives in Oldham, as over the last ten years both he and other local activists have challenged racism at all levels.  He sees the project as part of a wider anti-racist campaign to counter myths about asylum seekers, pointing out that three of the refugees are doctors.  “People do not flee their own country and leave behind everything and everyone close to them on a whim”, he says.

Luft feels a strong link with his own background. “I grew up in Manchester in the 1940s and my family background included Rumanian, Russian, Irish and Scottish roots. In my neighbourhood I was surrounded by refugees. But it was a political, a communist background where opposing racism and particularly fascism was part of my lifeblood.”

To raise funds for the project Luft recently walked 200 miles in two weeks through France, following the route of Spanish refugees who fled Franco’s Spain in 1936.  “It was a kind of pilgrimage of a political nature. I wanted to not only walk in the footsteps of those who fled Spain but also visit the villages in which the French Resistance literally fought the Nazis and Vichy Police.

“It was very personal for me. I was linking up the history of those who fought fascism in Spain and then became refugees in France, linking up with those heroes who fought in the French resistance.”

For Luft this history shows how becoming a refugee can happen to anyone, and drives home the importance for the Destitution Project to make real the lives and experiences of refugees and challenge a system that tries to alienate them from the rest of society.

Despite the £4000 raised on his trek, the Destitution Project is still struggling to continue to provide food parcels. Luft says: “If you oppose racism, if you want to make a real contribution to challenging the silence and alienation around asylum seekers, please contribute to our campaign.”