Manchester suffering from highest rate of repossessions outside London

Research published this week by homeless charity Shelter suggests Manchester is suffering from the highest rate of repossessions in England outside of London, at a level nearly double the national average. 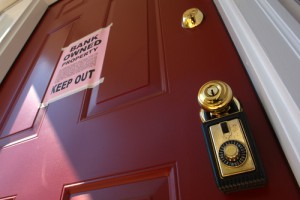 The Eviction Risk Monitor research analysed the number and location of possession claims – an advanced stage in the possession process – across England between October 2010 and September 2011, and displayed the geographical distribution of repossessions on an interactive map.

A YouGov poll commissioned by Shelter in April this year suggested that one third of people are struggling or failing to meet their housing costs, while more than two million were using credit cards to pay their rent or mortgage. Last month the charity estimated that between November 1 and Christmas up to 35,000 would face the prospect of losing their home.

Campbell Robb, chief executive of Shelter, said: “As Christmas approaches, this research paints a frightening picture of thousands of families living every day with the fear of losing their home hanging over their heads. It’s sobering to see that so many communities are blighted by the risk of eviction.”

The introduction to the report explains how “[r]ising inflation, stagnant wages, unaffordable housing costs and expensive fuel are just some of the forces tightening spending power”, while “[r]eckless lending prior to the credit crunch has left many families burdened with unsustainable debt”.

Possession claims in the increasingly important private rented sector have been climbing more quickly than elsewhere, rising 8 per cent. On top of those other factors contributing to rising repossessions, those in private rented accommodation are, according to the research, “frequently left vulnerable to possession action as a result of hold-ups, changes and errors in the benefit system”.

There has also been a 22 per cent increase in possession claims issued by landlords using the ‘accelerated procedure’, where an order can be made at the end of shorthold tenancies on written evidence alone, without any hearing of grounds necessary. Accelerated procedure is used almost exclusively in the private rented sector.

As rents continue to reach record levels across the country, Shelter’s research also demonstrated the strong correlation between possession claims and rates of unemployment, and vice versa. Figures released last week by Manchester Monitor showed that unemployment in Greater Manchester rose by 13.5 per cent in the past year, while MULE also reported how real incomes in the city region have fallen more sharply than the national average.