It has been one whole year since Manchester City Council launched its climate change action plan, ‘A Certain Future’, so what has been achieved in that time, and where do things go from here? This was the question that was supposed to be answered on November 30, at the first annual stakeholder conference held at the Museum of Science and Industry. 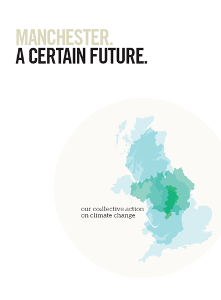 The location was deliberate; among all the industrial and technological ‘world-firsts’ on display in the museum – from the railway to the computer – Manchester City Council is talking up its chances of leading the world once again, this time in the transition to a green society. It is unfortunately mere boosterism: Manchester has a moderately successful ‘knowledge economy’ nestled in the middle of a vast expanse of post-industrial decay, botched regeneration projects and grinding poverty. Conditions for economic or technological revolution are not ripe.

Nonetheless, it’s fair to say the city council have been more forward thinking in their approach to climate change than their partners in the Association of Greater Manchester Authorities – they have a plan after all, and a plan that was drawn up with ‘stakeholder participation.’ 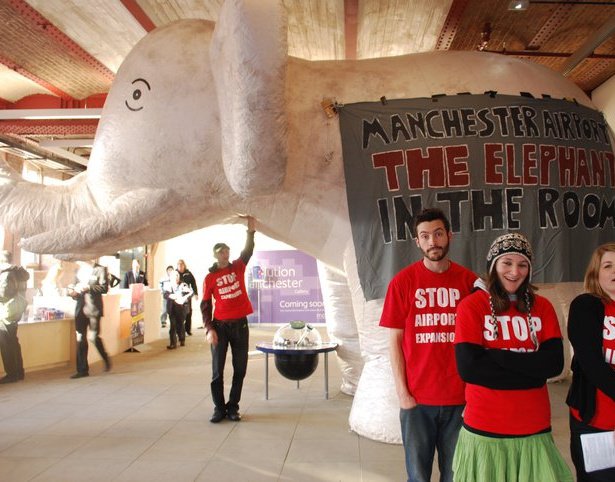 Not all stakeholders are happy of course, and most pertinently Manchester’s environmentalists have long bemoaned the council’s refusal to take into consideration the emissions created from the ever-increasing number of planes which take off and land at Manchester Airport – 55 per cent owned by Manchester City Council. Some of these malcontents, Manchester Climate Action, were there to greet guests with a startlingly large inflatable elephant in the foyer. The proverbial ‘elephant in the room’ when it comes to Manchester and climate change is, they stress, aviation growth. The city council protest their innocence, saying that there’s nothing they can do prior to an international agreement on aviation emissions.

Are the greens just spoilsports? That would depend on the answer to the original question, ‘what has been achieved?’ Entering the conference suite as an admittedly relatively uninformed punter, this question is damned hard to get an answer to. There is no definitive document or display available which lists or summarises the achievements, this immediately arouses suspicion.

Instead, dotted around the lobby are boards with titles such as ‘Living’, ‘Moving’, and ‘Adapting’ – they’re basically summaries of the chapters of the report, and we’re being encouraged to scribble comments on them suggesting how they can be taken forward or improved. We’re handed postcards for the same purpose. How will our comments be integrated into further planning processes? What process are they going into? Who knows. The point is, we’ve ‘participated’ in the process and ‘had our say.’

It’s information that your correspondent is after though. Perhaps Council leader Richard Leese can provide some in the opening address. Sort of. We have a few examples of schools and businesses which have taken steps forward in their greenery, and scattered references to projects potentially in the pipeline such as the city centre district heating network and a housing retrofit as part of the Low Carbon Economic Area plan, alongside boasts of more trees having been planted than for “many years” and the Town Hall being refurbished. The LED Christmas lights are referenced as an example of “awareness translating into action.”

The only solid piece of information comes with the claim that Manchester City Council has apparently achieved a 5 per cent reduction in carbon emissions over the last year, and hopes to have achieved another 10 per cent by next April. For more detail, we’ll have to wait until next year, when the Green City Team will produce a report to measure progress according to the goals set.

The plan is as Sir Richard and numerous others stress throughout the day, not the council’s plan but the city’s, and the big disappointment of the day, admitted publicly by Leese, and privately by numerous members of the Green City Team, is the small number of organisations which have endorsed the plan, and the even smaller number which have produced internal delivery plans. It’s probably the best metric of success available at this stage, and it doesn’t look good: over 1,000 organisations invited to endorse the plan, only 126 positive responses so far. Out of these, only two have produced delivery plans and one of them is the council anyway (the other is Northwards Housing).

Many of the organisations which have taken a lead on responding to the plan were present, scattered around the various workshops during the day sharing their achievements. Without wishing to allow cynicism to cloud the effort expended, there is nothing on show that could genuinely be called innovative – it’s all simple energy management techniques (turning off the lights and radiators in rooms not being used), basic retrofitting (low energy light bulbs, more insulation) and the signing of non-binding pledges of a kind that has been around for years.

The overwhelming impression one is left with is just how frail local government really is. Even with the best of intentions, they simply don’t have even a fraction of the legislative and financial power necessary to really spur the move towards a green society. If political power was genuinely decentralised it might be realistic for Leese to talk about cities like Manchester being the drivers of change in responding to climate change. But it’s not. Local government was drastically weakened by the Thatcher government in the 1980s, and will be again by the present government’s reforms – despite the rhetoric of localism.

Instead the only choice is to try and gently cajole businesses and citizens into doing it themselves, hence all the ‘dialogue’, ‘engagement’ and ‘incentives’ which litter council climate-speak. It’s a bit of carrot, but no stick, all completely reliant on the assumption that companies might decide out of the goodness of their hearts to risk putting the planet before their profits. And, as cities increasingly compete among one another for dwindling flows of investment, any local authority that really did attempt to force businesses into greening would quickly find itself losing ground in the race to the bottom. While remaining cheerily – or disingenuously – optimistic about the future, it seems widely acknowledged that real force for change remains with central government – things like the Green Investment Bank, feed-in tariffs and the forthcoming carbon emissions commitment will be the measures which ultimately force change.

This is not to let the council off the hook. As the campaign organisation ‘Call to Real Action’ showed, even within the constraints faced by local government, there is much, much more that could be done. In the last words of his foreword to ‘A Certain Future’ Richard Leese says, “Now we have to provide a new kind of leadership; a new model for growth. We have to radically shift the way we think, the way we work and the way we live. We have to work together to create a safer future. We can, and we will.”

There are some key words missing from the whole plan however which are conspicuous by their absence – words like ‘justice’, ‘democracy’, ‘poverty’ and ‘inequality’. Just like with the cuts, the language is one of ‘We’re all in this together’. But like with the cuts, we’re not. Those who will be able to deal with the coming climate crisis are the same as those sitting comfortably in the current economic one – the ones who can afford to.

For over 20 years the council has enthusiastically pursued ‘growth first’ at all costs. During this time Manchester’s urban landscape has been marked by rising levels of inequality and social exclusion, exarcebated by the most recent economic crisis. The council’s response to the climate crisis – as well as the economic one – is more of the same, except with (hopefully) less carbon. It is perhaps time to think seriously about the effects this will have on the rest of us, and about who it’s going to be a “safer future” for.