Interview with Executive Member for the Environment Nigel Murphy

MULE caught up with Manchester City Council’s executive Member for the Environment Nigel Murphy at the first annual climate change stakeholder conference held at the Museum of Science and Industry on November 30. 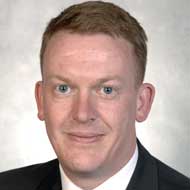 MULE: How would you rate progress made on ‘A Certain Future’ climate plan over the past year?

Nigel Murphy: It’s been good but it’s a shame there aren’t more delivery plans that have been put into action. The city council have got its implementation plan there, which takes time, and we understand it takes time with most organisations. I think we have led by example, but it’s not just a council plan it’s a plan for the whole city. We’re one organisation among many.

MULE: Only 126 organisations have endorsed the plan so far and only two have made delivery plans, what about the others that haven’t?

NM: The council will do what it can to support other organisations going forward, we’ve got the Green City Team to go out and help them, we’ve got the business pledge which will help, and then there’s things like today, sharing ideas and sharing resources.

MULE: Is there a problem here that when it comes to businesses and the environment, the local council has got a bit of carrot, but not very much stick?

NM: I prefer the carrot to the stick. It’s about showing what incentives are there for people and them realising how they can benefit by saving energy and saving resources and then the benefits spread by word of mouth. More stick could be useful, but not necessarily needed.

MULE: What impact will the cuts have on Manchester’s efforts to respond to climate change?

NM: Well, we could look at advantages such as the feed-in tariffs, which will be beneficial to the city, but we don’t know what’s going to be happening really, our budget has just been delayed until 9 December and we’ll have more of an idea after that. We’ve got to work with what we’ve got.

NM: It is. We’re lucky to have Richard Sharland who helped pull our plan together, and he’s helping to coordinate the plan for Greater Manchester. I think we’re in a good position, we’ve learned we can’t do it on our own, we need to share resources across the board. We can solve some of the problems here rather than creating new ones.

MULE: Manchester City Council is in many respects more forward thinking on the environment than some others in Greater Manchester, is there a danger the current report will now be watered down?

NM: I hope not, but let’s wait and see what comes through. Just remember the plan we have in Manchester is on a city basis, not just the council, hopefully some of the good sides from that can come out in the Greater Manchester plan, and hopefully we can put forward some of our views as well, but with any organisation like that we’ve got to share and we’ve got to compromise. [The plan will be delivered in January]

MULE: The protestors in the lobby complaining that you’re ignoring the airport, do they have a point that you can’t really make a climate change plan for Manchester without considering the impact which the planes taking off from the airport have?

NM: We’ve never said that we don’t consider the effects but we’re trying to deliver where we can make change. As an organisation the airport are doing their own delivery plan. Airside emissions are not something we can change on our own in Manchester, there has to be an international agreement. More than happy for them to protest, but we’ve got to look at what we can change and what we can change now.