Passing the buck on fuel poverty

Despite rising bills and cuts to winter aid, the UK has pledged to eradicate fuel poverty by 2016. But past government targets to protect vulnerable groups by 2010 have already been missed. And under the Coalition, new schemes are weakening protections and passing on responsibility for eradicating fuel poverty onto energy companies with little incentive to end the problem – and less interest. Sam Cordon reports. 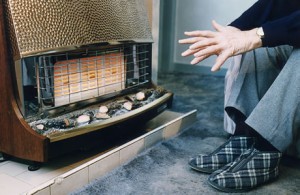 One person experiencing fuel poverty is Derek, a 65 year-old pensioner living in Preston. Derek explained to MULE how suffering from arthritis means he spends a lot of time in his flat, which needs to be heated for 16 hours each day. His recent pension and benefits review cut his income by just over £44 per week, but he has to spend just under a quarter of his total income keeping warm. This means less money to spend on food.

The Coalition argue the most sustainable way to help people like Derek is to focus on improving the energy efficiency of homes. The figurehead of their strategy is “the Green Deal”, which will replace previous “Warm Front” grants with a loan that can be taken out by any homeowner in order to improve their home’s energy efficiency. In theory this loan can be paid back through consequent savings in their energy bill, but the government’s focus appears more to do with reducing carbon emissions than providing support for people struggling with high energy prices and low incomes.

During last year’s winter 3,400 people in the North West died from the cold. Of those, 2,300 were aged over 75. Pressure on the elderly is rising, with the “Big Six” energy companies raising their tariffs last year between 18 and 22.6 per cent. Despite this, Winter Fuel Allowance payments are being cut back to levels last seen in 2008, with people over 80 having their support slashed down by a quarter and pensioners under the age of 79 seeing their allowance cut by one fifth.

Warm Front grant funding to help people better insulate their homes is also being wound down from £350 million last year to £100 million next year, after which it will be scrapped. Under new policy, responsibility for supporting the fuel poor is being passed downwards through an “Energy Company Obligation” scheme to the same energy companies who between 2004 and 2009 hiked electricity prices by 75 per cent and gas by 122 per cent.

Precise details of how the scheme will work are still scarce, but the government’s own impact assessment suggests it will barely make a dent in fuel poverty. The assessment estimates a reduction in the number of homes in fuel poverty from 550,000 to 350,000 by 2022, and at maximum it is expected to aid 43,000 households per year. To put this into perspective, 5.5 million households are fuel poor according to government figures. The same impact assessment argues the cost of helping this relatively small group of households will be passed onto consumers, many of whom are already fuel poor.

The cuts in support have attracted some local opposition, with Stretford MP Kate Green telling MULE how she has been contacted by many of her constituents concerned about the effects of fuel poverty. When asked what she would do, she said “I have been pressuring the government to reconsider its decision to phase out Warm Front, which is the only tax funded initiative to help those on low income to improve their heating and insulation standards.”

Neil Duncan-Jordan, National Officer for the National Pensioners Convention (NPC), was blunter. “The rate of deaths among pensioners during the winter months is a scandal, yet the government is simply sitting on its hands saying that it’s nothing to do with them.”

The new government strategy to keep down the cost of fuel bills is labelled the “Warm Home Discount”. A rebate of £120, this is funded by the energy companies and is paid automatically to a “core group” of those in receipt of guaranteed pension credit. Energy companies are legally obliged to extend this discount to an ill-defined “broader group” of vulnerable customers, who are expected to apply for the rebate themselves rather than receive it automatically.

These energy companies are in charge of setting the eligibility criteria for the “broader group” and the number of households it includes. But when each of the big six energy suppliers were contacted to ask if they made people aware that they could be eligible for a rebate on the winter fuel bill, only three of them confirmed they had written to customers who they consider may be “eligible”.

These were Eon, EDF and Scottish and Southern Energy Company. Out of these three, only EDF carried out a comprehensive mail shot informing customers that there may be winter savings available. Scottish Power confirmed that not all people who were eligible received the rebate as it was issued on a first come first served basis, with the scheme being limited to 3,000 households. Not quite comprehensive coverage.

Pensioner organisations appear little impressed, with Duncan-Jordan telling MULE pensioners were facing “a perfect storm” of “rising bills, a cut to the winter fuel allowance and cold weather.”NPC general secretary Dot Gibson harshly criticised the scheme in a statement to reporters, saying its organisation was too complicated and left pensioners confused as to whether they qualify for the wider scheme or not.

“Neither the government or the big six energy company companies seem particularly bothered about letting people know what help is available,” was her verdict.