A fortnight ago, MULE reported on the arrest of six people who had squatted the disused Kro2 bar on Oxford Road against plans to turn the site into a Tesco – and more broadly against the steady “corporate takeover” of the city centre. How do incoming proposals to criminalise squatting in residential properties relate to Manchester’s shifting character? And what are the underlying forces behind these changes? 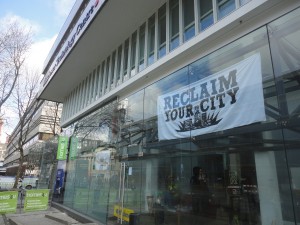 Crticism of Tesco and other high street chains has become common fare in British politics, in part due to their aggressive expansion on high streets up across the country. A quick glance at changes along the Oxford Road provides evidence of this in Manchester. 200 metres up the road from Kro2 bar, former night club ‘Jilly’s Rockworld’ turned into a Tesco in 2011 (with a Pizza Express replacing the Music Box next door), and a new Sainsbury’s recently opened opposite Big Hands near the Universities.

Small businesses, environmentalists and local residents have often led opposition to new stores and even centre ground politicians such as Lib Dem Councillor Marc Ramsbottom have raised concerns over the “monoculture….dominated by chainstores” that is being created in central Manchester.

Yet as the Kro2 protesters, who launched a facebook group called, “Reclaim Your City” were keen to point out, “This isn’t just about Tesco, bad as they are.” The Kro2 occupation was an act of dissent against the creeping loss of community spaces in central Manchester and also against new plans to criminalise squatting in residential properties, which passed through the House of Lords last Tuesday 27 March. Squatting has historically been used to reclaim disused public spaces – and turn them back to community use. A local example of this is ‘The Okasional Cafe’  which drew its inspiration from similar squatted social centres in Barcelona in the 1990s. Incidentally, one of the earliest OK Cafes was at the site of the other Kro Bar opposite the University of Manchester Students Union back in 1998.

How are the squat ban and corporatisation issues linked? Despite the myths pushed in sections of the media about residents having their houses squatted while they were out to the shops, the new law that criminalises squatting is more about protecting large property owners than ordinary homeowners. As the recent campaign from Squatters Action for Secure Homes (SQUASH) noted, “The vast majority of these empty buildings are owned by large corporations, banks, offshore companies, local authorities, other government departments, and not by private individuals.” Housing solicitor Giles Peaker commented on the proposed laws, “The whole thing would make virtually no difference to homeowners whatsoever.”

Be careful what you wish for

The Kro2 protest aimed to draw attention to this wider context and also open up a space to ask how the dominance of corporate interests is maintained. At a local level, Greater Manchester Police played an important part in the repression of the Kro2 protest after seemingly unlawfully forcing entry to the building, arresting everyone inside, and later releasing them without charge after re-securing the site for property giants Bruntwood. The six people say they are now making plans to sue the police for wrongful arrest. 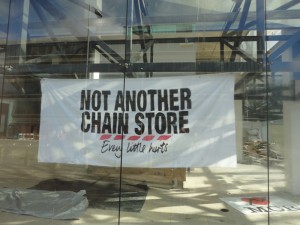 At a political level however, the cross-party orthodoxy that economic growth acts as an efficient wealth generator needs to be questioned. George Osborne’s budget last week was “unashamedly pro-business” and Manchester City Council and the Labour Party are calling for a return to economic growth as a way out of the latest crisis. The TUC ‘March for the Alternative’ in 2011 also included calls to enlarge the economic pie with the banner ‘Jobs, Growth and Justice’. While there are obviously large differences between these groups, there is a common repetition of the mantra that ‘growth is good’. Instead there needs to be a greater deal of scrutiny as to what outcomes are produced by this growth model. Do we make a rod for our backs?

In the print edition of the Manchester Evening News, Tesco responded to the Kro2 protest with claims that a new store would create “around twenty jobs”.  Whatever the proposal, claims of job creation are dangled in front of us like a golden carrot. The underlying assumption is that investment equals growth equals prosperity.

But does this growth model lead to prosperity? Putting aside the environmental concerns of endless growth on a planet of finite resources, what sort of jobs are being created and where does this prosperity go? The creation of a handful of well-paid management positions and lots more low-paid low-skilled roles should not be a measure of a successful economy. The loss of community space doesn’t seem like a worthwhile price to pay for 20 jobs most of which will be precarious and low paid – especially when we might find ourselves pushed out of them for a workfare scheme a few years down the line.

And is another corporate store really that good for Manchester’s economy if large swathes of the profit is siphoned off in executive pay? Tesco pre-tax profits stood at £3.54 billion in 2011, with CEO Phillip Clark able to receive a maximum pay package of £6,900,000. Meanwhile the The Fair Pay Network has criticised the major supermarket chains for entrenching poverty by failing to pay most of their staff a UK Living Wage.

This isn’t a question of being against new jobs, but an objection to how claims of new employment opportunities can be used to justify any new proposal, even if these new jobs do not create any new prosperity for those on the shop floor. By championing economic growth and its corporate guardians, we increase the political power of these elites both locally and nationally. The Kro2 protest aimed to highlight this root cause and the join the dots between the issues of corporate power and the incoming further criminalisation of squatting. We don’t want to grow the pie in Manchester, we want to challenge how the existing pie is sliced up.

Corrections: This article has been amended from an earlier version to make clear that the Legal Aid, Sentencing and Punishment of Offenders Bill proposes to criminalise squatting in residential properties and not all properties, and that the Bill has yet to be formally made an Act of Parliament until it returns to the Commons after the Easter recess