Dozens held a solidarity demonstration outside the disused Kro 2 restaurant earlier today following the arrest of six activists who occupied the site in protest against anti-squatting laws and what protestors call “the corporate takeover” of central Manchester. 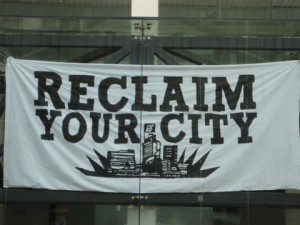 One of the banners hung inside Kro 2 by occupiers. Photograph via www.northern-indymedia.org

Activists occupied the site on Sunday evening, hanging banners with slogans including “not another chain store” and “every little hurts”, claiming the empty restaurant may be converted to a Tesco chain store. The demonstrators argue a rising “dominance of big businesses at a local, national and international level”, including the strong prevalence of corporate chains in Manchester, places increasing pressure on communal public spaces.

Property management company Bruntwood, the landlords for the site, declined to comment on whether there are any future plans for the building but told MULE the current lease is still held by the owners of Kro 2. The Manchester-based restaurant chain’s website says the site is “currently closed for refurbishment”.

Early Monday afternoon police officers forced entry to the site and arrested four men and two women on “suspicion of criminal damage”. Around 50 protestors gathered outside waving anti-Tesco placards before a group of 40 moved up Oxford Road to demonstrate outside Bootle Street police station near Manchester town hall to protest the arrests.

A Greater Manchester Police spokesperson said officers entered the property after they attended the address following reports of an intruder and “found that wooden fencing and a door had been damaged”.

Eyewitness Georgia Ashley argued the “forced entry and arrests were unlawful”, claiming that police had “no evidence that any of the six people who happened to be in the space at the time were responsible. It was just an excuse to get them out.”

Ashley, who was involved in the original protest but was not in the building at the time of the arrests, said protestors were there to challenge the “increasing corporate takeover of our city”, arguing that “as more and more identical chainstores are built, rents are going up and ordinary Mancunians are getting priced out.”

Protestors also objected to the conduct of the police. One of the original occupants said she was “angry”, and accused police of “unlawfully arresting people”. She also claimed that there had been no breaking and entering on the site, but protestors had been hanging banners instead.

“Earlier cops tried to bring in dogs, they said ‘oh perhaps there’s drugs here’ and they didn’t find anything”, she added.

Robert Taylor, a spokesperson for the group, said the demonstrators demanded “community spaces, not commercial space.” Ashley added that they wanted “ordinary people to ask the question, ‘Who runs Manchester? And in whose interests?’”