Confirmed: Kro 2 WILL be another Tesco

Rumours of plans to turn Oxford Road’s Kro 2 restaurant into a Tesco have been confirmed with the publishing of a licensing application on Manchester City Council’s website. 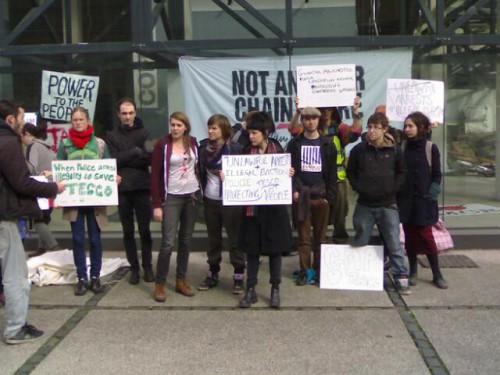 Previous rumours that the site was to be converted to a Tesco sparked a sit-in and demonstration on 19 March outside the disused Oxford Road restaurant in protest against the “corporate takeover” of the city centre by major developers.

Six people who occupied the site were arrested by Greater Manchester Police on “suspicion of criminal damage”, and were later released without charge.

A number of supermarkets already exist along  Oxford Road, including another Tesco on the site of the former nightclub Jilly’s Rockworld, and independent retailers have voiced concern over the growing impact of corporate chains in the area.

Ursula Gothard, a member the 8th day co-operatively-run ethical food shop and cafe on Oxford Road, told Mule her letter of objection had garnered 480 signatures before she handed it into the council’s offices.

Gothard argued the supermarket development would have effect of both “squeezing independent companies” and homogenising the high street for shoppers.

“With the supermarkets’ massive buying power smaller business can’t compete and won’t survive, and this minimises people’s choice. There’s no point having Mary Portas and ‘save the high street’ if these corporations are allowed to build directly next to the smaller establishments”, she said.

There is also concern that with a 6:00am – 23:00pm alcohol license, the Tesco store would cause alcohol-related problems in the area.

As part of the campaign, Gothard has spoken to both Manchester University and Manchester Metropolitan University representatives, who agree that a further establishment with this type of licensing could pose major problems for Oxford Road. She explained they too have expressed concerns to the council, highlighting late alcohol licensing as a main objection to the build.

“There is already a serious ongoing problem with anti-social behaviour, along the Oxford Road Corridor. A further establishment with this type of licensing will only amplify this”, said Gothard.

The application is the latest of a series of supermarkets which are planned to go ahead in the area. The council and property firm Ask Developments, who are landlords for the Oxford Road site, are already in talks for a further 70,000 square ft supermarket as part their investment plans for the First Street area to the west of Oxford Road.

Under the proposals the Corner House cinema and the Library Theatre will also both be relocated to First Street, and away from Oxford Road.