Manchester City Council privately instructed Children’s Services staff to block out parents campaigning to protect their Sure Start centres, according to a leaked email seen by MULE. 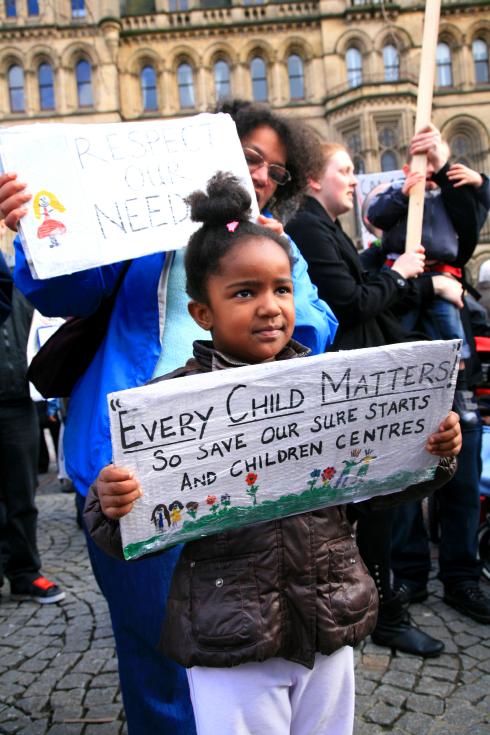 Children’s centre workers were told a “crib sheet” would be issued to them to ensure that “parent communication  sessions” would not be “hijacked by this group” in the email sent by Yvette Cox, communications manager for Children’s Services, on Tuesday 15 March.

In addition to “managing” the sessions, the document instructs staff “not to respond to the group directly” and warns not to “provide the group with any information.”

Meetings between parents and Sir Richard Leese, leader of the council, to discuss the cuts were subsequently arranged for each of the city’s 36 children’s centres following a vigorous campaign organised to protect Manchester’s Sure Start Service against severe cuts.

The secretive tone appears to contradict the public position of Leese, who told parents at Clayton Sure Start on Monday 21 March that “I absolutely support 100 per cent the right of parents to organise.” It is understood that councillors blame ‘miscommunication’ for the email and claim the intention was to prevent names and addresses of parents and staff being given out.

Under the council’s budget plans, passed last week, cuts are to be made to a quarter of the city’s children’s services. Sure Start centres providing day care, health and family support and early education for pre-school children are to be wholly outsourced to be run by schools, voluntary groups and, campaigners fear, private companies.

The tendering process is anticipated to be rolled out over two stages over the next 12 months and it is currently unclear who will run the centres. Executive for children’s services Councillor Sheila Newman stated in a letter to parents that “it is inaccurate and misleading to say that decisions have been taken to close services or offer the services to a big private provider.” 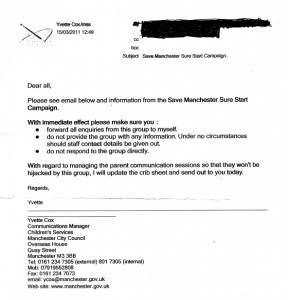 The leaked email. Click on the image twice to read in more detail

Council funding is to end for all services beyond provision for “targeted” families with “complex needs” and its legal requirement to provide all parents with 15 hours of free daycare per week in term time.  The council’s direct provision of 25 per cent of the city’s day care places will cease, while fees beyond its legal requirements will be hiked from £126 each week by an average of £30.

The cuts come as part of a national attack on Sure Start by the coalition government; with a Parliamentary question tabled by Labour shadow education secretary Andy Burnham revealing that the service is to lose an average of 23 per cent of its funds. In Manchester £8 million has been lost from the Early Intervention Grant, which pays for the centres in addition to support for disabled children, community groups and guidance and support for young people.

Manchester City Council were contacted by MULE regarding the instructions in the leaked email but have not given a direct reply.