Parents fight back for Sure Start

Over three hundred parents and their children rallied outside Manchester’s town hall last Saturday as part of the campaign to defend Sure Start from cuts, fee hikes and privatisation. 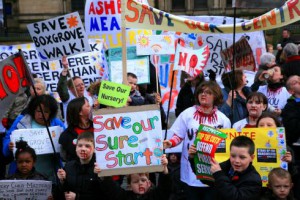 Demonstrators waved banners and chanted “save our Sure Start, the heart of our community” and “no ifs, no buts, no need for cuts.” They were joined by councillors, trade unions and local MPs, although Manchester City Council leader Sir Richard Leese was booed when he attempted to address the rally.

While council chiefs insist they have no plans to close any of the city’s 40 children centres cuts are already taking place. Professionally qualified teachers offering education to pre—school children have been scrapped and all centres are to be outsourced, placing them under the control and responsibility of charities, school and – many fear – private companies. However it remains unclear at this stage if enough organisations will be found to run every centre.

Sure Start centres work with other agencies including schools, the NHS and Job Centre Plus to provide a range of services primarily aimed at pre-school children and their families. These include day care, ‘early learning’ for children under five, drop in and advice sessions for parents and carers and access to child and family healthcare.

Lead campaigners Tanya Manderson and Claire Tomkinson, mothers of children who use Beswick and Clayton Sure Start centres respectively, told Mule of their determination to save key services such as outreach workers and father-child bonding sessions.

“We understand they have to make cuts and we don’t have a problem with charities. What we do have a problem with is private companies coming in,” said Tomkinson. “We want reassurance they’ll do it responsibly and keep the core plan with organisations that respect the values and beliefs of Sure Start.”

Manderson explained that campaigners were fighting to keep the centres open to all, saying losing universal access would have a “knock on effect” for the whole community. “It’s about getting one community to use the centres together instead of segregation” she said, adding their next step was to put pressure on the government in London. 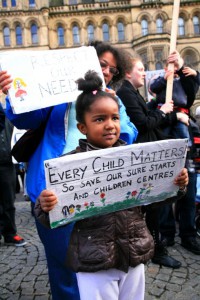 Tony Lloyd, MP for Manchester Central, said “we’re only at the beginnings of the protest,” drawing comparisons between saving Sure Start and the successful campaign to prevent wholesale sell-offs of Britain’s forests. He promised to “put my voice loud and firmly to David Cameron” and warned that lower-income children without Sure Start would have less opportunity in their lives.

The campaign was launched in reaction to Manchester City Council’s proposed 26 per cent cut to its Children’s Services budget. Council leaders argue they have no choice due to a 25 per cent overall reduction in their spending by the government. The slash to the department will see £8 million lost from the ‘Early Intervention Grant’ which covers Sure Start, youth services and help for vulnerable families.

Nationally the grant has been cut by just under 11 per cent, according to Department of Education figures. Meanwhile 7 per cent of Sure Start centres in the UK are at risk of closure, as revealed by research carried out between the charities 4children and the Daycare Trust.

Manchester itself bears the dubious distinction of the worst levels of severe child poverty in the UK, affecting over one in four children according to a recent Save the Children report.