Councillors yesterday voted through next year’s budget cutting 25 per cent of Manchester City Council’s spending on public services, including the loss of 2,000 jobs. Vocal protestors twice forced the meeting to adjourn, urging councillors to vote against the settlement.

Shouts of “no ifs, no buts, no public sector cuts” and “vote with the people, not with the Tories” came from around 80 demonstrators in the public gallery, angry at the Labour-controlled council’s acquiescence to the government’s funding settlement. Onlookers were drawn from protestors fighting to save Manchester Advice, Sure Start and the successful campaign to save Levenshulme Baths, as well as Manchester Coalition Against Cuts.

For his own part, council leader Sir Richard Leese said in a statement after the meeting that “the scale of the cuts makes it impossible to put together a balanced budget – which we are legally obliged to do – without it having an impact on frontline services. We have done our best to minimise that impact.”

However, the council was already been planning to implement its own cuts: £96 million and 1,000 redundancies spread over three years had been planned for prior to the last election. Council chiefs insisted this would not have led to “front-line service” reductions, prompting cries of “liars” from onlookers. Nevertheless Leese condemned the ‘front loaded’ impositions by central government of £109 million lost this year, rising to £170 million the next, labelling them as “ideological cuts that are too fast and too deep.”

As the meeting drew on the depth of the cuts were laid out. Sure Start children’s centres, libraries, sports and leisure and “potentially all services for adults” will be hit, including cuts of over a third to the Supporting People Grant paying for home carers, the elderly, the homeless and people with mental health problems. The council was unable to resist from insisting that the scrapping of Manchester Advice would “improve access”, though few arguments were offered to support the claim.

Speaking for opposition councillors, Liberal Democrat leader Simon Ashley acknowledged Secretary of State for Communities and Local Government Eric Pickles – a minister in his own party’s coalition government – was “making things worse and he shouldn’t be a secretary of state”. He also accused Labour of “inflating the impact of the cuts” for political purposes by deliberately targeting front line services, saying items of additional spending in the budget such as an extra £6 million for children in care ‘proved’ that finances were not as dire as made out.

Strikingly, his claims match both Labour and the Conservative’s denial of any responsibility. Echoing Ashley’s dispute over just how much the council has to save, Pickles claims that Manchester has been “protected” from the worst cuts and only has to lower its budget by 15 per cent. The minister’s figures come from the government’s official use of ‘revenue spending power’, which excludes important funding streams such as the Direct Schools Grant and includes estimations of council tax income, a small part of Manchester’s budget expected to fall as the impact of the cuts bite.

In contrast, the Lib Dems said the successful fight to save Levenshulme swimming baths proved they could protect services. This was not well received by members of the public, who shouted “liar, shame on you, you did not save our baths,” and sarcastically enquired as to whether they had sought copyright permission before displaying Levenshulme campaign posters with party symbols emblazoned next to them. 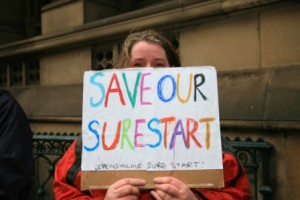 In their alternative budget Lib Dems proposed that £12.2 million, just over 10 per cent of the planned cuts, should be rescued through several measures including cutting £2 million from consultants and council communications and sharing more services with local authorities. Additional income could be budgeted, it was claimed, by anticipating future revenue from schemes such as extending licensing for landlords across the city.

Labour councillors introduced their own amendment to reverse the decision to close Levenshulme Baths, stating it would be kept open until a replacement facility was built. Plans for other services were less concrete; promises were made to prioritise any extra funding that might become  available towards services for adult care, family support and pre-school children and to resolve to “ensure there were no gaps in provision” from the closure of advice services.

In the somewhat choreographed debate that followed Labour councillors poured scorn on Lib Dem proposals, noting how there were no practical details or recommendations included in the plans to cut consultants or communications and pointing out that a roll out of licensing would take up to 93 months, with “no evidence” it would raise more money than it costs.

Summing up, Leese said hopes of saving money through sharing services with other councils were “purely speculative” and accused the Lib Dems of being “fraudulent and fictitious” with their budget figures and “dishonest” in their claims.

The vote on the budget was split predictably along party lines. Yet despite the deafening chanting of “don’t vote for cuts” by protestors the budget was passed.

Such an end to the morning was never in doubt. Whether unable or unwilling to protect their communities from cuts, it was hard to resist the conclusion that any hope that a fightback can come from local councils is undermined by the stark realisation of just how powerless they really are.